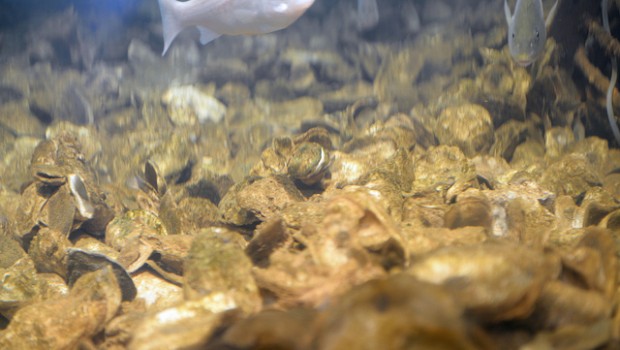 Shellfish constitute an $800 million a year industry in New Jersey, one that is primed for growth. (Wikimedia Commons)

But unlike the harmful algae blooms of the same name, this red tide is likely to bring good news for the shellfish: It’s a dye designed to check if pollution levels have decreased enough to reopen the oyster beds for harvesting and human consumption.

Over the last few days, New Jersey and federal environmental officials dumped red dye into a creek that empties into the northern Delaware Bay. The creek is a known source of bacterial pollution from numerous sources, including birds and animals, and the idea was to see if the water is now clean enough to reopen thousands of acres of nearby oyster beds that have been off-limits for years due to contamination.

Bob Schuster, bureau chief of marine water monitoring with the New Jersey Department of Environmental Protection, said water entering the bay from the Delaware River has improved in quality due to numerous water treatment facility upgrades and pollution control projects in recent years.

The dye is a stand-in for pollution sources: If little or no dye makes it to the oyster beds, that means the shellfish are not experiencing as much pollution as they once were, and could be safe for consumption. Data from the testing will be collected and analyzed over the next few weeks.

“We’re really optimistic about this,” Schuster said. “We’re looking to see how far it goes, and in what concentrations. That will help us re-draw the lines, so we can know which areas to open up. We feel we can get a big portion of that area upgraded.”

The stakes are high. Shellfish constitute an $800 million a year industry in New Jersey, one that is primed for growth. There are 720,000 acres of shellfish beds statewide, 78 percent of which are approved for harvesting, Schuster said. The testing could lead to the reopening of as much as 80 percent of a 5,000-acre tract of oyster beds.

“That is great news,” said Tim Dillingham, executive director of the American Littoral Society, a coastal conservation group. “We’re always happy to see improvements in water quality, and particularly happy to see more oysters made available to the watermen whose livelihoods depend on them. Oysters are a keystone species; they filter water, help improve the water quality of the bay and create jobs for people and communities along the bay shore.”

A single oyster can filter 50 gallons of water a day, making them ideal natural allies in the fight to clean up polluted waterways.

Scientists with the DEP and the U.S. Food and Drug Administration released a non-toxic red dye into Stow Creek, which flows into the northern bay, not far from the Salem nuclear power plant. The dye flowed out into the bay, where boats trailing tracking devices called fluorimeters measured the dye in concentrations that were too small for the naked eye to see.

Meredith Comi, oyster restoration director with the NY/NJ Baykeeper group, said the dye testing is a good way to assess current pollution levels, “It’s a common way of looking at how particles are distributed in the water. I think it’s great that they are looking to see if water quality is improving and I find it encouraging.”

After the data is analyzed, the DEP will decide which, if any, additional shellfish beds can be reopened. Then the regulatory process of implementing that decision begins, which can take several months.

Rutgers' Ayeni a man of many agricultural hats