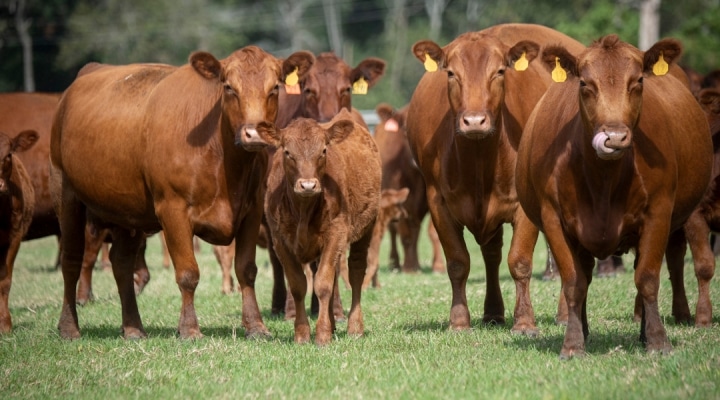 The Red Angus Association of America serves the beef industry by enhancing and promoting the measurable advantages of Red Angus and Red Angus-influenced cattle. (U.S. Department of Agriculture, Public Domain)

Acceligen has already bred and registered animals that express a trait known for better tolerance to tropical and sub-tropical heat. Black-to-red gene edits have also been made on multiple calves that will be born soon. These traits are a part of Acceligen’s business portfolio that focuses on providing opportunities to the global cattle industry for better genetic management of animal well-being and health.

RAAA recognizes the efficacy of this advanced technology to provide its breeders with new opportunities along with an enhanced and expanded gene pool. Red Angus is the first beef breed organization to accept gene-edited animals into their registry, recognizing the potential benefits they can bring to the breed. Tom Brink, CEO of RAAA, explained, “In considering the future, we see an opportunity to accelerate the Red Angus breed’s genetic progress by selectively allowing gene-edited animals into our population. The technology has been proven to be both safe and effective, and for traits such as the slick hair coat and black to red, there is a chance to speed up the introduction of useful, naturally-occurring genes and genetic combinations that would take many generations to accomplish through traditional breeding efforts.”

According to Acceligen CEO, Dr. Tad Sonstegard, “Working with the Red Angus Association provides a prime opportunity to boost purebred breeding programs via desirable traits and overall breed improvement outcomes that could take decades through classical breeding methods. These traits also demonstrate how genetics can solve problems ranging from carbon footprint to biodiversity, which are topics we are all concerned about relative to the beef production value chain.”

During the breeding process, Acceligen makes changes to the candidate animal’s genome that are identical to those that occur naturally in other cattle breeds. Accessing Acceligen’s breeding platform allows producers to introduce important traits in a single generation to rapidly achieve the same historically safe and effective outcomes of any conventional breeding program. Acceligen also de-risks the process of commercialization for breeders and commercial producers by providing complementary efforts to obtain regulatory clearance on gene-edited traits in cattle. At this time of pre-commercial acceptance by RAAA, both heat tolerance and coat color traits require final regulatory decisions from the U.S. Food and Drug Administration. Acceligen is currently working with FDA for trait commercialization.

The Red Angus Association of America serves the beef industry by enhancing and promoting the measurable advantages of Red Angus and Red Angus-influenced cattle. The RAAA provides commercial producers with objectively described cattle by implementing new technologies and utilizing scientifically sound principles that quantify traits of economic importance to beef producers in all segments of the beef industry. For more information, visit www.RedAngus.org.

Founded in 2014, Acceligen is a recognized global leader in the development, deployment and commercialization of precision animal breeding technologies. Acceligen believes in better living for all through better animal genetics. Using Nobel Prize winning gene-editing tools, we accelerate genetic improvement in food animals with naturally occurring traits to address critical issues in global farming. Learn more about our company, a wholly owned subsidiary of Recombinetics Inc., at Acceligen.com.