Home » Recruiting ants to fight weeds on the farm 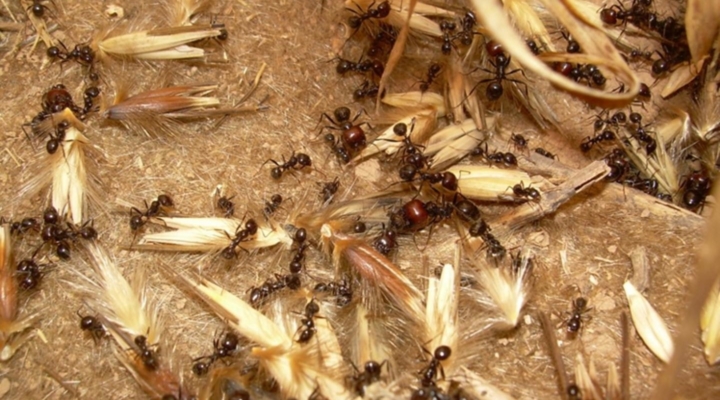 CENTRE CO., Pa. — Harvester ants that eat weed seeds on the soil’s surface can help farmers manage weeds on their farms, according to an international team of researchers, who found that tilling less to preserve the ants could save farmers fuel and labor costs, as well as preserve water and improve soil quality.

“These ants are naturally present in the fields,” said Barbara Baraibar Padro, a postdoctoral scholar in plant science, Penn State. “They are able to remove a huge amount of weed seeds from the system, and if farms till less to preserve these ants, it can benefit them.”

Tilling a field disturbs the soil and can destroy ant nests. The researchers wondered whether tilling had an impact on the number, size and distribution of ant nests in the fields, and how these factors could influence the ant’s ability to control weeds.

“Tilled fields might harbor more weeds because they don’t have the pressure from the ants,” said Baraibar. “If you don’t disturb the soil, you might have more ants.”

The researchers compared the number and size of ant nests in four tilled fields and three no till fields in Spain. They also marked the locations of different ant nests using GPS, then analyzed how evenly spaced apart the nests were in the tilled and no till fields. Their paper will appear in Biological Control in January 2019.

The researchers also predicted that ant nest distribution would differ between tilled and no till fields. Ants normally compete with each other and defend territories, causing an even distribution of ant nests throughout a no till field. But tillage could kill some nests at random and leave some areas with no ant nests to remove weed seeds from the surface of the soil.

Farmers in Spain growing winter cereal crops like barley till the soil twice a year. While the fall tilling can help farmers prepare their fields for planting, the researchers do not believe that summer tilling is as beneficial.

“Agronomically, I’m not sure if that tillage makes that much sense,” said Baraibar. “You’re probably losing a lot of water and you are burying all the weed seeds so they are no longer available for the ants.”

In the dry, semi-arid regions of Spain, farmers need to preserve water and maintain soil quality to have a good crop. Tilling less can help farmers save water, improve their soil, and reduce the costs of fuel and labor, as well as helping the ants that consume weed seeds. Harvester ants can also help farmers manage herbicide-resistant weed species such as rigid ryegrass, a grass that ants may prefer, and with ant colonies living for years, these benefits are long-lasting.

“Careful timing of the tillage can preserve the benefits of weed seed removal that the harvester ants provide, and also help with preparing the seed bed or controlling summer weeds,” said Baraibar. “So you’re not losing the benefits of tillage, but doing it at the right time.”

Christmas trees and their decorations have evolved