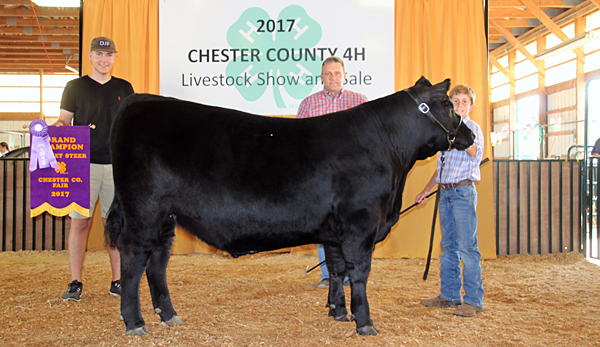 The Champion Steer was purchased by Deana Jak Farms of Wagontown for $2/lb. Standing with Ethan is Doug Howe, owner of the farm.

HONEY BROOK, Pa. — Quality ran deep through all the livestock species shown this year at the Chester County 4-H Livestock Sale held on Aug. 9 at the Romano 4-H Center in Honey Brook. Judge Sam Long of York County commented on the depth in each class and congratulated the exhibitors on the quality of their projects. Record crowds were on hand each night to watch the 4-H livestock shows and view the various projects completed by our community clubs and outreach members.

The 4-H members did a great job with their animals and the buyers certainly supported their efforts. The sale averaged well above the market prices for the day. Nine steers, 67 hogs, five goats and 38 lambs were shown and sold at the annual event. Buyers came from all over the region to support the sale.

The Champion Market Hog was shown by first year member Olivia Jaekle of West Chester. The 248-lb. hog sold for $8.50/lb and was purchased by GrayHawk Home Care, owned by Andrew Henderson of West Chester who then donated the hog to the Chester County Food Bank to support them in their efforts to provide nutritious food products to those in need.

A pair of siblings repeated their performance from last year exhibiting the Champion and Reserve Champion Market Lambs. Brooke Mazepink and her brother Jason from Parkesburg exhibited the grand and reserve lamb. The Grand Champion Lamb was purchased by Richard and Diane Hicks of Unionville for $10.50/lb. and the Reserve Champion was purchased by Mid-Atlantic Farm Credit of Lancaster for $6/lb. both breaking the record for the lamb sale.

For further information on the 4-H program in Chester County, contact the Penn State Extension Office at 610-696-3500.

This summer, where are all the local plums?