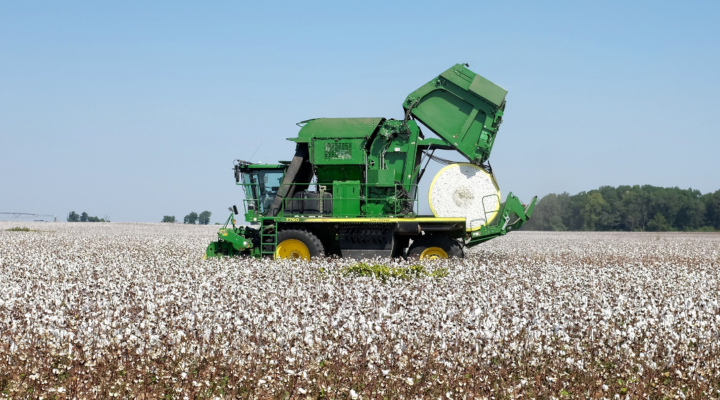 "A good year for us in the past would have been 30,000 to 40,000 bales; last year we ginned 60,000," said Jeannie Hileman. "This year, our acres have doubled, and we're not sure what that's going to mean for us, although it's going to be a big increase in bales." (Peter Burka, Flickr/Creative Commons)

New is a subjective descriptor in this case. The gin, with a price tag of $3.5 million, was only slightly used in North Carolina, but it’s new to Carnegie. Hileman said brand-new machinery would cost $11 million or more. The co-op also bought 80 acres north of Carnegie for installation.

This year’s cotton growing season is making that deal even sweeter. Crews are rushing to put the gin together with just three weeks left before harvest, because this year looks to be a record-setter in Oklahoma. Hileman said an 18-month construction process has been trimmed down to less than half that time; the gin will be ready for the second pass of baling, running in tandem with the current equipment.

Harvey Schroeder, executive director of the Oklahoma Cotton Council, said farmers were expecting about 555,000 acres producing cotton in the state this year. The latest figures from the National Agricultural Statistics Service under the U.S. Department of Agriculture suggest that number will be closer to 580,000 acres, moving Oklahoma to the third-largest producer of cotton in the U.S., supplanting Mississippi.

The Journal Record reports that government reports have also adjusted the state’s expected yield per acre to 848 pounds, up 80 pounds from August, leading to a projection of nearly 1 million bales for the 2017 Oklahoma cotton crop.

Schroeder said gin operators have been preparing as well as they can to handle the increased load. Lee Stinnett, office manager at the Cotton Growers Cooperative in Altus, said his co-op is planning for longer workdays than normal.

Stinnett said the increase of cotton acres is primarily due to poor grain prices. Farmers rotate crops to protect the quality of their land while seeking the best profit margin, and this year that meant less wheat and milo. Cotton also has a deep taproot that finds nourishment below the reach of wheat plants, which probably helped as well.

Schroeder and others in the industry are keeping their fingers crossed. Harvest is still three weeks away and the weather could always take a nasty turn. It looks like crews will be pulling bolls by hand as well as stripping the plants with machinery to keep up this year, he said.

The full harvest should be done by Christmas. Ginning the seeds from cotton fibers probably won’t be finished until April.

“Our neighbors to the south lost a lot of cotton to the hurricanes,” Schroeder said. “You can’t count your chickens ’til they hatch.”

Information from: The Journal Record, http://www.journalrecord.com

–By BRIAN BRUS, The Journal Record