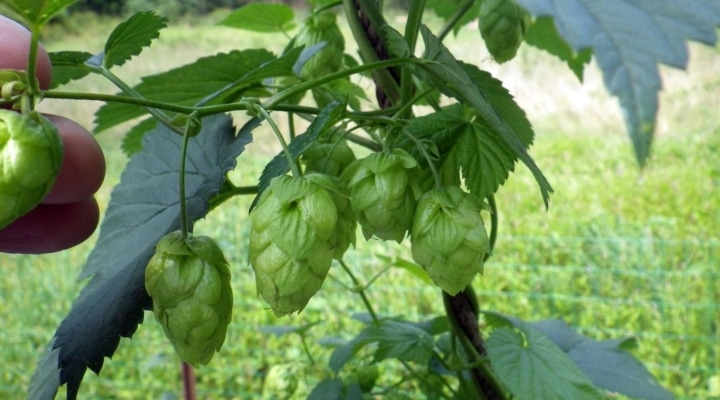 The number of hop farms in a state is related to the number of craft breweries. (Penn State)

STATE COLLEGE, Pa. — Craft breweries aren’t just a fun place to meet up with friends. They may be fueling an unprecedented geographic expansion of hop production across the U.S., according to researchers at Penn State and The University of Toledo. Their findings suggest that as more craft breweries emerge around the country, so may new opportunities for farmers.

Hops are a key ingredient in beer production, providing aroma and bittering characteristics. Before 2007, hop production in the U.S. was limited to only three Pacific Northwest states–Oregon, Washington, and Idaho–according to Claudia Schmidt, assistant professor of agricultural economics in Penn State’s College of Agricultural Sciences. Citing a report released this year by the Hop Growers of America, she said that 29 states are now engaging in hop production.

“Our study is the first to systematically show that the number of hop farms in a state is related to the number of craft breweries,” said Schmidt. “It suggests that in areas where hop production is possible and not cost-prohibitive, breweries are expanding markets for farmers and providing an opportunity to diversify farm income.”

“This growth has not only led to interesting changes in the locations of hop farms across the U.S., but it has positioned the U.S. as the largest producer of hops globally, both in terms of acreage and production,” said Elizabeth Dobis, a postdoctoral scholar at the Penn State-based Northeast Regional Center for Rural Development, and lead author of the study.

Working with farm, brewery, and climate data, the researchers developed a statistical model to determine whether new craft breweries in a state between 2007 and 2017 resulted in a larger number of hop producers and hop acres planted, by both new and existing growers in that state. They built a time-lag into their model to identify the effect of new breweries over time. They also controlled for other variables that may influence

Their findings, which were published recently in the Journal of Wine Economics, are correlational and do not point to a clear cause-and-effect. However, the time-lag built into the model indicates that the growth in breweries preceded the growth in hop farms, said Dobis.

One possible explanation for the trend is that the growing consumer demand for locally sourced food and beverages encourages craft brewers to seek out locally grown ingredients, said Schmidt.

“While most craft breweries serve a local market, they haven’t always sourced local ingredients for their beers,” Schmidt said. “But if you’re a brewer looking to differentiate yourself in an increasingly crowded market, sourcing ingredients locally is an approach that some brewers have found to be effective.”

For example, in a project unrelated to this study, Penn State Extension’s Kristy Borrelli and Maria Graziani conducted focus groups with Pennsylvania craft brewers, who reported that sourcing ingredients locally helps them connect with their customers’ sense of place and preference for a flavor profile that is unique to the region.

If more brewers are looking for hops grown nearby, then more farmers may be willing to try growing them, even if only on a small scale. For instance, in Pennsylvania only 17 farms reported hop production in 2017, and their combined acreage is small–only 21 acres in all, according to the U.S. Census of Agriculture.

Looking forward, the researchers said that they will collaborate with Penn State Extension to identify the specific attributes and price points that Pennsylvania craft brewers are looking for in order to help inform farmers’ production decisions.

Over 65,000 hens to be culled in bird flu outbreak