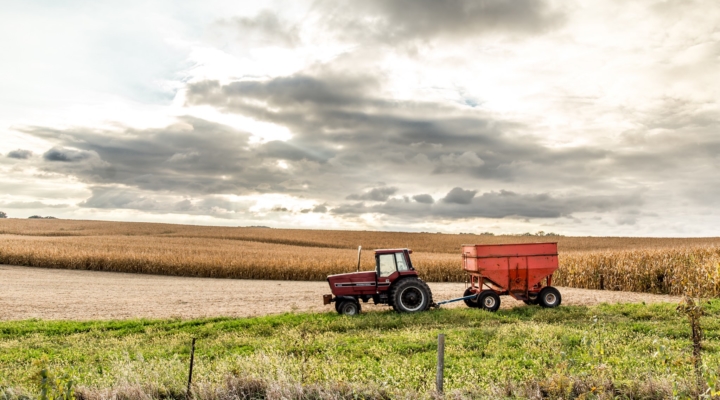 WEST LAFAYETTE, Ind. and CHICAGO — The Purdue University/CME Group Ag Economy Barometer declined 26 points, down to 117, in July making it the largest one-month decline in producer sentiment since data collection began in October 2015. The drop in sentiment was fueled by increasing trade war concerns and decreasing commodity prices.

“This summer we’ve seen tariffs placed on imports of U.S. ag products by China and Mexico that are impacting producers’ bottom line,” said James Mintert, the barometer’s principal investigator and director of Purdue University’s Center for Commercial Agriculture. “This month, we asked producers whether they expect to see their net income decline as a result of trade war conflicts. Over two-thirds of respondents indicated they expect to see lower income because of trade conflicts with over 70 percent of them expecting a net income decline of 10 percent or more.”

“Commodity prices dropped sharply in June and July, and there is real concern among producers that those prices will remain low and, possibly, fall even further,” said Mintert. In the July survey, approximately 4 out of 10 producers stated they think it’s likely December 2018 corn futures will trade below $3.25 per bushel and November 2018 soybean futures trade below $8 per bushel between mid-July and this fall. “Prices in that range would result in a significant cash flow squeeze for many farm operators,” said Mintert. “While prices at those levels would cover variable production expenses, it would leave some farmers falling far short of covering fixed and overhead expenses.”

The negative outlook on commodity prices spilled over into farmland values as well, with 31 percent of producers saying they expect lower farmland prices over the next year. Farmers also became more apprehensive about making large purchases, as 73 percent indicated it’s a bad time for large farm investments. Read the full July Ag Economy Barometer report at http://purdue.edu/agbarometer. The report includes more information on producer concerns over the trade conflict and its impact on agricultural exports. New this month, get additional July barometer analysis in a video from Center for Commercial Agriculture Director James Mintert. Available now at https://youtu.be/7QiiIMUcjhs.

About CME Group
As the world’s leading and most diverse derivatives marketplace, CME Group ( www.cmegroup.com ) is where the world comes to manage risk. CME Group exchanges offer the widest range of global benchmark products across all major asset classes, including futures and options based on interest rates, equity indexes, foreign exchange, energy, agricultural products and metals. Around the world, CME Group brings buyers and sellers together through its CME Globex ® electronic trading platform. CME Group also operates one of the world’s leading central counterparty clearing providers through CME Clearing, which offers clearing and settlement services across asset classes for exchange-traded and over-the-counter derivatives. CME Group products and services ensure that businesses around the world can effectively manage risk and achieve growth.

Many plants poisonous to pets & livestock