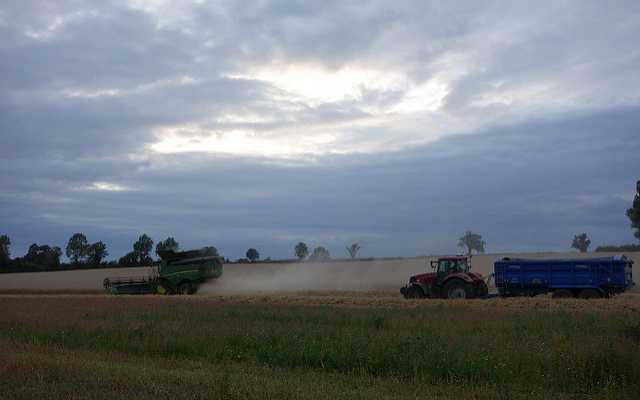 Figures from the United States Department of Agriculture’s National Agricultural Statistics Services show 90 percent of the 350,000 acres of corn planted in South Carolina in 2017 had been harvested as of Nov. 26. A total of 90,429,000 acres of corn were planted in the entire United States in 2017. (photo by judithbluepool, creative commons/flickr.com)

CLEMSON, S.C. — Big crops in 2017 means South Carolina producers will have to adjust their budgets in 2018 to account for lower prices.

This was the message Clemson agricultural economists Nathan Smith and Scott Mickey gave during the recent 2018 Ag Outlook conference. Smith said corn, cotton and soybeans all had good crops in 2017.

Just as corn producers, South Carolina cotton producers reported a really good crop in 2017, Smith said. The USDA shows 250,000 acres of cotton were planted in the state in 2017 and producers are expected to harvest a 940 pound per acre yield, second best on record.

“Cotton producers looking for pricing opportunities in 2018 will have to closely watch the markets and budget more closely,” Smith said. “What is encouraging for cotton producers is cotton use is up and we have strong exports. Hopefully the lower prices will encourage more exports and more use.”

The majority of U.S. cotton exports go to Vietnam, but Smith said those involved with the cotton industry should closely watch China purchase activity with the U.S. and the rest of the world.

South Carolina soybean production for 2017 was one of the biggest soybean crops the state has ever seen, said Mickey. The total number of soybean acres planted in South Carolina in 2017 was 400,000 acres.

“The soybean crop was a great crop for producers,” Mickey said. “Unfortunately, prices were not as good as they had hoped.”

South Carolina is projected to have a record yield at 37 bushels per acre.

Just as the South Carolina crop, the soybean crop for the entire United States also is a record crop. A total of 90,207,000 acres of soybeans were planted in the United States in 2017 and another near-record yield of 49.5 bushels per acre is projected.

“The 2017 crop is one of the best yields South Carolina has ever had,” Smith said. “Right now, we’re looking at two ton peanuts in the state. I almost want to call it a ‘warehouse buster.’ We’re probably going to fill up all of the available storage space for peanuts.”

Peanut prices were up in 2017, but the large crop probably will lead to lower prices in 2018.

“With the additional supply of peanuts, I believe we can expect to see more use of peanuts,” Smith said. “And with exports, as the shelled price comes down, we’ll see more peanuts being exported. This will help with our supply situation.”

Across the board, with soybeans, corn, cotton and peanuts, Smith said things will look similar for all crops except peanuts.

“Peanuts probably will be the crop that could lose to the other crops because of the lower price projection,” he said.

More information about the program, as well as lists of certified farmers’ markets, certified products, participating farmers and more can be found at www.certifiedscgrown.com.