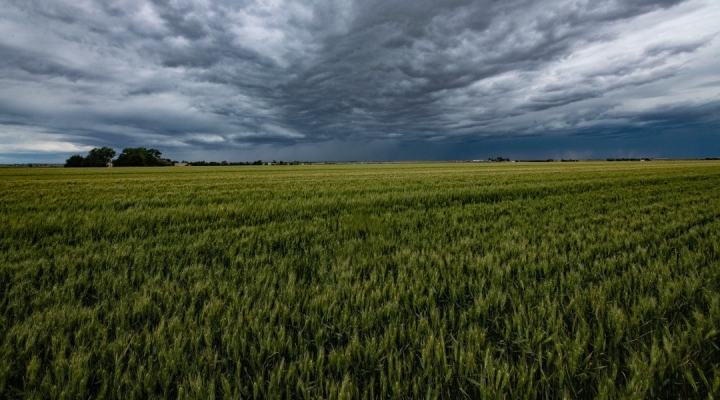 Larry Redmon, Ph.D. and associate department head of the Department of Soil and Crop Sciences at Texas A&M University, said while recent rains did help some crop production, dry, windy conditions and hail kept most wheat producers from taking advantage of the higher wheat prices caused in large part by a dearth of exports from Russia and Ukraine. (U.S. Department of Agriculture, Public Domain)

COLLEGE STATION, Texas — While recent rains have provided a needed respite for agricultural producers in some parts of Texas, the majority of producers did not benefit and continue to hope for more, according to Texas A&M AgriLife experts and others.

“There has been a patchwork of rain throughout the state recently,” said John Nielsen-Gammon, Ph.D., state climatologist in the College of Geosciences Department of Atmospheric Sciences at Texas A&M University. “Some rains in North Central and South Texas have improved prospects for agricultural production, but it’s been very dry overall in most of the state.”

Nielsen-Gammon said thunderstorms in the High Plains area provided some relief for producers, while the area from San Angelo to Abilene in West Texas was mostly dry with below-normal rainfall. He also noted there had been little to no rain throughout most of the Panhandle.

“The system that came through recently may be the last big weather system we see for a while,” he said. “There may be some storms in West Texas in the near future, but then you can expect it to get hotter and drier.”

The Coastal Bend area, especially around Corpus Christi, has also continued to be unusually dry.

“The Alice area received anywhere from 0.5 to over 3 inches of rain, but most of the area closer to the coast only got a few hundredths of an inch,” he said. “The persistent high wind the last few weeks is just further drying us out.”

McGinty said cotton crops around the Corpus Christi area are mostly dry-planted and waiting on rain.

“Corn and sorghum stands are good, although both are showing signs of moisture stress by mid-morning on most days,” he said.

He also noted much of the Lower Rio Grande Valley received some good rains since late April, but that moisture will only carry the crops for a short while and more will be needed soon.

“They have greatly helped with forage and hay production in that part of the state,” he said. “But agricultural production anywhere west of I-45 has been generally poor, unless there has been irrigation.”

Redmon said one of the more significant missed opportunities for producers has been in wheat production.

“With what’s happening in Ukraine and Russia, there has been little to no wheat exportation to the U.S. and wheat prices here have been very high,” he said. “But the general lack of rain in the state has kept producers away from planting wheat or has had a negative impact on wheat crops. As a result, many producers have lost out on what could have been a very good opportunity for them.”

Some beneficial rains, but irrigation continues

Ben McKnight, Ph.D., AgriLife Extension state cotton specialist in the Department of Soil and Crop Sciences, Bryan-College Station, said the rains have brought some good progress to both corn and cotton crops in Williamson and Milam counties.

“However, I’ve seen some ‘skippy’ fields where some of the stands received adequate moisture and others did not. Even there, the soil moisture appears to have been inconsistent.”

While cotton in the Blackland Prairie area and Texas High Plains still needs rain, he said cotton, corn and sorghum crops in the Brazos Valley area all benefitted from recent rains.

“Most irrigated producers were applying pre-irrigation,” she said. “And along with the rain came a lot of hail, some of it up to baseball size, that damaged structures and destroyed a good amount of the wheat crop.”

She said generally the soil moisture profile was poor and soils were badly depleted.

“Even where good rainfall was received, it wasn’t going far with the hot windy days,” Bell said. “Some producers are proceeding with planting irrigated ground, but most are still waiting for more rainfall for dryland planting.”

Larry Stein, Ph.D., horticulturist based at the Texas A&M AgriLife Research and Extension Center in Uvalde and associate head of the Department of Horticultural Sciences, said rains have been “hit and miss” throughout the Texas Winter Garden region.

“Cotton in this area has come up very well this time around,” he said. “A lot of that was due to our getting adequate rains recently.”

He said spinach, onion and cabbage crop production in the Winter Garden was generally steady but down somewhat from last year.

“The onion bulbs this year were also a little smaller than what we usually see because of the drier-than-normal weather,” Stein explained.

Nielsen-Gammon said rain is usually reliable in April, but this year has been unusually dry and those producers who received rain were fortunate.

“There may be some rainfall in the near future, but unfortunately it will also be hotter, drier and windier across much of the state,” he said. “This will worsen the situation in some of the places that got rain, as they may lose a good bit of it to evaporation. And for the other areas that did not receive adequate rain, the situation will be even worse.”

However, Nielsen-Gammon said there is still the possibility of longer-range prospects for rain, and “you can get into a wet-weather pattern pretty quickly,”

“May and June are typically the wettest months of the year in Texas, so even if we get less than average rainfall over those months, we still may get enough to help with agricultural production,” he said. “Time will tell.”