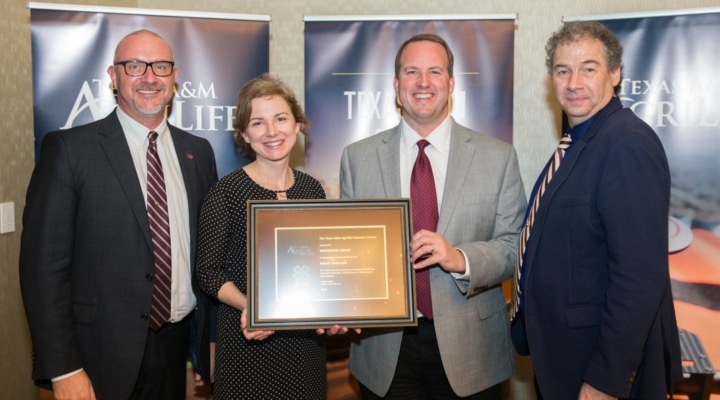 The partnership award honors key individuals, organizations, agencies and others outside the Texas A&M University System whose dedicated support and excellence have significantly enhanced the impact of AgriLife Extension programming.

After Hurricane Harvey, the OneStar Foundation and the Michael and Susan Dell Foundation collaboratively established the Rebuild Texas Fund to provide funds to meet the urgent needs of communities in South Texas most affected. The fund’s focus areas included support for housing, education, childcare, health, small business, community and economic development, and workforce and transportation.

In 2018, the Rebuild Texas Fund awarded AgriLife Extension a grant of $193,796 to conduct Mental Health First Aid, MHFA, and Youth Mental Health First Aid, YMHFA, trainings in Aransas, Calhoun, Nueces, Refugio, San Patricio and Victoria counties. This funding made it possible for 30 AgriLife Extension agents and faculty to become certified MHFA and YMHFA instructors in January 2019. Then from March to July of that year, 356 community members in the six counties attended MHFA and YMHFA courses taught by those instructors.

“MHFA is an evidence-based, internationally recognized program that teaches participants how to identify, understand and respond to signs of mental illnesses and substance-use disorders,” said Miquela Smith, AgriLife Extension program specialist for the agency’s Healthy Texas initiative, Amarillo. “The training gives participants the skills they need to provide initial support to a friend, family member, co-worker or another adult who may be developing a mental health or substance-use problem. The youth version of the program gives adults who work with youth, such as teachers, coaches and 4-H leaders, these same skills.”

AgriLife Extension MHFA instructors reached diverse audiences, including first responders, probation officers, educators, domestic violence shelter workers, workforce developers and others. The National Council for Behavioral Health estimated the value of the MHFA course as $170 per person, but thanks to the Rebuild Texas Fund Grant, the course, including lunch and materials, was provided at no cost to community members.

In July 2019, the fund awarded AgriLife Extension a second grant of more than $300,000 to broaden the scope of MHFA training to include all 41 affected counties it served. Funding was designated for training 30 additional AgriLife Extension staff as MHFA and YMHFA instructors, program implementation and two Peace of Mind conferences. Through this additional funding, AgriLife Extension will train 500 new community members in MHFA and YMHFA through July 2020. It also will host two Peace of Mind conferences to promote awareness and education related to mental health and substance use issues.

Funding from the Rebuild Texas Fund over the past two years will make it possible for more than 800 Texans in 41 counties to gain critical mental health-related skills, program coordinators said. The trainings, in conjunction with the Peace of Mind conferences, will help to reduce the stigma associated with mental health and substance use, resulting in healthier communities.

The Rebuild Texas Fund has been an outstanding partner to AgriLife Extension over the past two years, stated the award nomination. Program director Neeraj Aggarwal and program officer Cristina Cornejo were cited for their support of and confidence in AgriLife Extension’s county-level reach and capabilities.

“The Rebuild Texas Fund also wanted to go beyond helping rebuild the physical structures after a major disaster and help more with the mental health aspect of the people affected,” Cornejo said. “When we started speaking to officials and others in the affected communities, we learned the point people and trusted resources in those communities, especially in the rural communities, were part of Texas A&M AgriLife Extension Service. When we heard the agency also had an interest in addressing the mental health of people in Texas communities after a disaster, we knew we had found a great asset with which to collaborate.”

Cornejo said having AgriLife Extension personnel in the communities affected by Hurricane Harvey would also help in the event of further disasters that may occur.

“Using the train-the-trainer model, these people also provide a valuable leave-behind asset for these and other Texas communities for providing mental health support and basic knowledge of any assets and resources available to help,” she said.

“Since natural disasters are not limited to South Texas, the support we received from the Rebuild Texas Fund also made it possible for some additional AgriLife Extension agents from other counties to become MHFA instructors,” Carter said. “This will help us increase our agency disaster preparedness statewide.”

USDA announces appointments to the Cotton Board