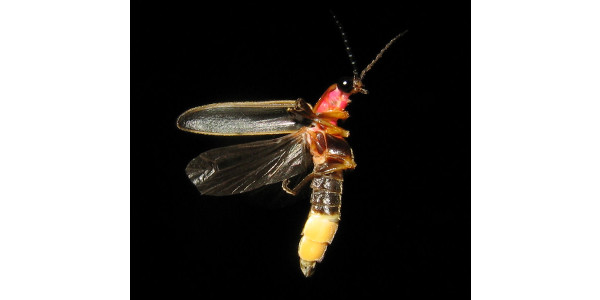 Standing in the new darkness of a 100-acre wood on a recent summer evening, a group of University of Georgia entomology graduate students witnessed magic in the air — literally — as thousands of fireflies of different species rose from the forest floor to flash their luminescent love songs to hopeful mates hiding below. (file photo courtesy of UW-Extension)

ATHENS, Ga. — It was a perfect evening as night pulled down its curtain on the sun and dusk awakened the forest.

Standing in the new darkness of a 100-acre wood on a recent summer evening, a group of University of Georgia entomology graduate students witnessed magic in the air — literally — as thousands of fireflies of different species rose from the forest floor to flash their luminescent love songs to hopeful mates hiding below.

The group was invited by a local landowner and citizen entomologist to experience the masses of twinkling insects, some of which are rare species, an experiential learning encounter of the seemingly supernatural.

Amid the ancient chorus of night creatures ramping up for the evening, the young scientists were quiet in observation. But quickly, audible gasps added to the symphony of sounds and lights — an instinctive response to the enchanted forest around them, their collection nets forgotten for a moment.

The students’ curiosity soon got the best of them and they began to ask questions of their host, Allen, who pointed out the different species, identified best by their pattern of light flashes. He grew up on this land. He knows his fireflies by name and knows where they live.

This diverse property he calls “Springwood” is a sanctuary for several firefly species. Habitat variety is crucial for the different populations, as individual firefly species are picky about where they thrive.

“I started my study of fireflies when I discovered the Photuris frontalis six years ago,” Allen said of the species known as snappy sync, one of the few species of synchronous fireflies. These exceptional fireflies start low to the ground with a couple of off-beat flashes, followed by a dark pause, and then all of the beetles of the species flash together in unison, creating a fairytale-like trail throughout the forest floor.

Other species witnessed by the students were bush babies, big dippers, candle lantern, fast 5s and the rarest of all, Photuris forresti, better known as the loopy 5.

“It is hard to pick a favorite, but the rare loopy 5s have the most photogenic flash train and the coolest name,” Allen said of the firefly population discovered last year on the far side of the pond on the property, attracted to the moist habitat they prefer.

“I am also quite fond of the bush baby hatch — the density of their numbers is thick enough to rival your childhood memories of being engulfed in lightning bugs,” he reminisced.

The students shook themselves out of a trance, remembering their nets and the opportunity to bag samples for their collections. Allen, along with UGA entomology Professor Joe McHugh, began to show the students how to identify the different species by their flashes.

Armed with a little extra firefly identification knowledge and lots of enthusiasm, the students and McHugh spread out down the dirt road and into the woods, hoping for successful hunting.

Kelly Tims, an entomology doctoral student, was thrilled to participate in such a unique learning opportunity.

“Opportunities like this add so much joy to my educational experience. We’re in this department because we’re passionate about insects and knowledge, so being able to see insects in the field, observe a natural phenomenon, and talk to other like-minded folks about what we’ve seen really is what this is all about,” Tims said of the twilight expedition.

Once samples were collected and the flashes began to wind down for the night, Allen surprised the students with a boat ride across his pond to see the rarest of fireflies recently discovered and documented on his property — the loopy 5s.

This nighttime boat ride was the highlight of the trip for entomology master’s degree student Tristen Dittman.

“The coolest species was the loopy 5s — the ones that liked to hang out over the lake. Their flashes were very distinct, with one long flash upwards followed by three individual flashes. It was very cool to see something not found in many other places,” she marveled.

Tims agreed, her eyes lighting up.

“Climbing into canoes with new friends and paddling out into a dark, unknown pond where you are surrounded by frog songs and trees, all for a glimpse at the rare loopy 5 fireflies? Totally worth it,” she said.

As the evening came to a rewarding end, with jars and vials and memories collected, the group headed back to Athens reflecting on their experience.

“This trip really showed me the importance of citizen scientists observing their surroundings, being curious and reporting their findings. Allen told me he didn’t know anything about fireflies before, but now he is able to identify 11 species in his backyard. This information is invaluable to taxonomists like Dr. McHugh who are working to document and preserve the diversity that exists all around us,” Tims said.

“And the best way for this to happen is for us all to pitch in and contribute our curiosity to science,” she added.

It was a perfect evening. It was magic.