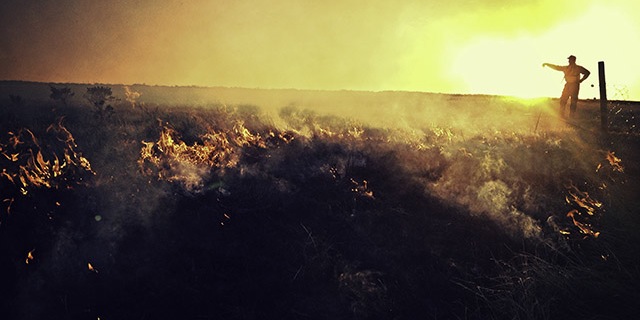 WASHINGTON — There is good news for beef producers in western states: They might not have to wait two to three years after a spring wildfire to graze cattle on federal rangelands.

Lance Vermeire, an Agricultural Research Service (ARS) ecologist in Miles City, Montana, found grazing within a year after a wildfire doesn’t harm grass and can provide just as much forage as sites that haven’t burned.

About 4 million acres of U.S. rangelands burn every year. Not all of that acreage is suitable for grazing, but millions of suitable acres do annually burn in wildfires.

The Bureau of Land Management and the USDA Forest Service generally recommend waiting up to three years after a fire before allowing grazing believing that grasses native to the dry climate of the northern prairies need that much time to recover. However, both agencies are shifting away from that position—in large part, because of findings by Vermeire and his colleagues.

In studies, Vermeire has found that native grasses usually survive wildfires. When a fire sweeps through, it takes the dead plant material from the surface, but most of the plant, which is below ground, escapes long-term damage.

Vermeire and his colleagues compared the productivity of tracts that were grazed with tracts that were not grazed at a South Dakota site where a spring wildfire burned more than 10,000 acres. They found no significant differences in grass production. The cattle removed 47 percent of the vegetation from the burned sites, which is the average rate of vegetation removal from grazing.

The study was partially funded by the Forest Service, and the results will help guide federal policies on rangeland management.

Read more about this research in the September 2017 issue of AgResearch magazine.