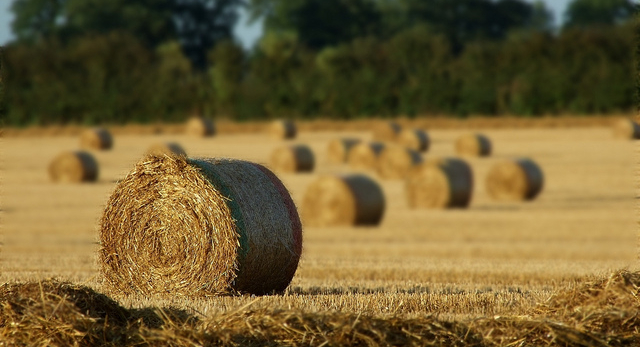 Texas Gov. Greg Abbott on Thursday suspended some permit requirements and transportation restrictions so supplies of hay could more quickly get to ranchers in the eight Texas Panhandle counties hit by the wildfires. (Jonathan Stonehouse, Flickr/Creative Commons)

AMARILLO, Texas (AP) — State agriculture officials and ranchers are scrambling to secure feed and other supplies for approximately 10,000 cattle and horses that fled this week from wildfires in the Texas Panhandle.

The Texas A&M AgriLife Extension said Thursday about 4,200 large bales of hay are needed to feed displaced animals over the next two weeks.

Trucks to shuttle animals from one location to another and fencing are among the needs as ranchers recover from the fires that killed four people and burned about 750 square miles in the state. Wildfires also ravaged parts of Colorado, Kansas and Oklahoma.

Jayce Winters, spokeswoman for the Texas Cattle Feeders Association, said preliminary counts indicate about 1,500 cattle were killed in the fires, but a more precise accounting could be days or weeks away.

Texas Gov. Greg Abbott on Thursday suspended some permit requirements and transportation restrictions so supplies of hay could more quickly get to ranchers in the eight Texas Panhandle counties hit by the wildfires. His order covers transport of round hay bales and also includes waivers for shipments coming into the disaster area from other counties in the state.

The governor said in a letter to Raymond Palacios Jr., chairman of the Texas Department of Motor Vehicles, that he wanted to “ensure that state regulation is not an unnecessary barrier to the emergency transport of hay” to ranchers in Carson, Gray, Hemphill, Lipscomb, Ochiltree, Potter, Roberts and Wheeler counties.

The Department of Motor Vehicles is asking shippers to contact the agency if their loads top 14 feet in height.