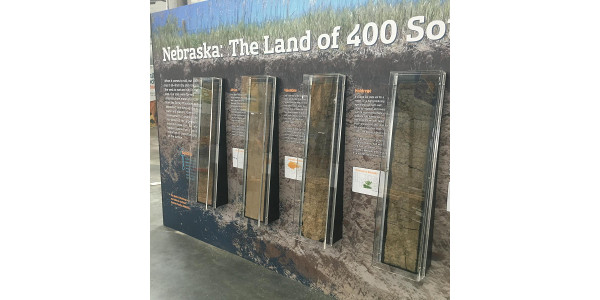 The Living Soils exhibit at Raising Nebraska features a series of soil monoliths—large preserved samples of actual soil types from across the state. (Courtesy of UNL)

LINCOLN — Raising Nebraska, the award-winning ag literacy experience on the Nebraska State Fairgrounds, has again received international recognition for its innovation in connecting consumers with their food and the families who grow it.

The “Living Soils” exhibit at Raising Nebraska tied for first place in its division in the category of “Newly Established or Evolving Program/Exhibit That Promotes Agriculture to the Public” in the 2017 Agricultural Awards Program sponsored by the International Association of Fairs & Expositions (IAFE). Raising Nebraska shared first place with the Maryland State Fair.

This is the fourth IAFE award that Raising Nebraska has won since it opened in August 2014.

“We had a great team working on this exhibit,” said Beth Janning, the Nebraska Extension educator who manages Raising Nebraska. “We enlisted the expertise of a number of people—from state soils scientists to farmers, from University of Nebraska-Lincoln faculty to museum exhibit professionals.”

“Living Soils” is a multimedia experience that includes an interactive game, informative graphics and photos, tactile experiences, informative pictorial flip books, a demonstration on the depth of the root system of prairie grasses and a series of impressive soil “monoliths”, which are large preserved samples of various soil types across the state.

A video kiosk features interviews with soil experts answering curious questions such as “What’s the difference between soil and dirt?” Animated videos adjacent to a large walkable map of Nebraska take visitors down into the ground beneath their feet to illustrate the various soil types, geology and underground water depth in selected Nebraska counties.

Information from “Living Soils” has been transformed into curriculum that is being delivered in schools across the state. “To date, the Living Soils curriculum has been presented to more than 1500 students from Omaha to Bayard,” Janning added. “We’re focused on taking the Raising Nebraska experience beyond the building in Grand Island and into classrooms and communities.”

Brewing up a business