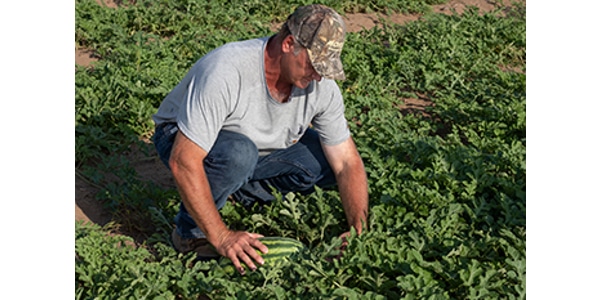 Beggs said that he "grew up in a watermelon field." The history and tradition of raising watermelons in Scott County means a lot to him. (Courtesy of Missouri Department of Agriculture)

BLODGETT, Mo. — “What’s the definition of a farmer? A man who’s out standing in his field,” Donnie Beggs of Blodgett, Mo. jokes. By this definition, he truly is a farmer, as he stands overlooking a watermelon field that has been owned by his family for more than 125 years.

Beggs said that he “grew up in a watermelon field.” The history and tradition of raising watermelons in Scott County means a lot to him.

His earliest memories are helping his family in the field with watermelons. When he was a young child, his family gave him a 10% share in the watermelon operation to help pay for school. Working with that money taught him not just be a worker, but a leader.

Growing up on his family’s watermelon farm has made Beggs a melon expert.

“You learn something every year. You’re not reinventing the wheel, but you’re trying to make the wheel better.”

Being a good steward of the land is also an essential practice on his farm.

“We make a living off of the ground that we farm,” said Beggs. “We don’t do anything to harm that livelihood. I eat these melons when they start, I eat them every day. Trust me I’m not doing anything that I would think would hurt a consumer in the market place because I’m going to eat more of them [watermelons] than anyone this year out of this field.”

Beggs’ watermelons stay local. If you’re buying watermelon in Missouri, there is a good chance that it may have come from his farm. He said that his crop stays within the United States.

He’s proud of the fact that he is a Missouri farmer.

“At one time they said we [the Missouri bootheel] were really the next California, because we had the water. We could raise anything that we wanted here,” said Beggs.

Out of all the crops he could raise, Beggs continues to choose watermelon above any other. In fact, gave up his row crop operation to focus on raising quality watermelons. His watermelon operation, that at one point he operated alongside his father and grandfather, is something he takes great pride in.

“Last year we celebrated the 125th year of raising watermelon in Scott County, Missouri,” said Beggs. “That’s why I farm for life.”