Home » Raise a Glass: A look back at American winemaking 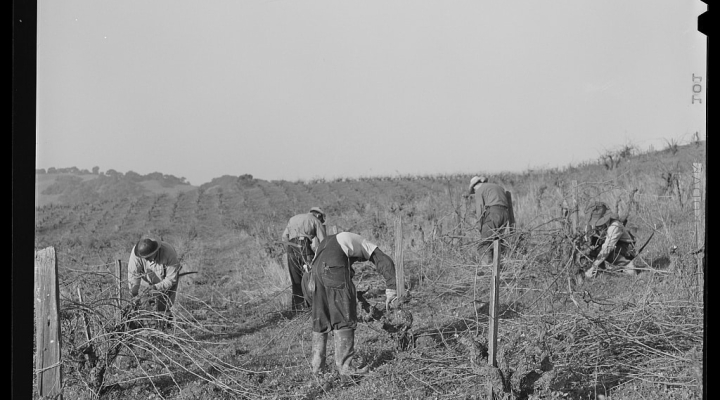 GREENWICH, N.Y. — Wine is one the oldest agricultural products dating back to the world’s oldest civilizations. The story of winemaking in America is marked by gradual growth with many stops and starts along the way.

Winemaking in America’s early history was a difficult and often futile venture. The earliest evidence of winemaking in the United States date back to the mid-1500s when Spanish settlers in parts of the south and French Huguenots in what is present-day Florida began making wine after settling in those areas. A few decades later English settlers tried making wine in the Mid-Atlantic area. In both cases a naturally growing grape called Scuppernong was used, however this grape did not make for the best tasting wine.[1]

Throughout the remainder of the U.S. colonial period winemaking attempts were made, but with very limited success. What made wine making difficult was the climate. Europeans used a grape species called Vitis Vinifera to make wine. However, this grape variety grew best in a Mediterranean-like climate with wet winters and dry summers. The colonies on the eastern seaboard with their cold winters and humid summers made these grapes susceptible to fungal diseases. An insect called phylloxera also ravaged most North American vineyards.[2]

However, the introduction of Vinifera to North America led to the creation of grape hybrids such as Alexander and Catawba which had some mild success. Throughout the first half of the 19th century every state that existed in the U.S. was making wine, albeit in very small quantities. The first commercially successful wine business sprang up near Cincinnati, Ohio where a popular sparkling Catawba wine was produced, however fungal disease wiped out this business just prior to the Civil War. Most wine that was consumed during this time was imported as records from the time report that in 1840 just 3% of wine consumed in the U.S. was American made.[3]

The American wine industry reached a turning point when the California Gold Rush began in 1849. People from all over the U.S. and the world poured into California in search of treasure. Winemaking had been happening in the region since the 1770s when Spanish missionaries started vineyards, however, the new California residents also came to discover that California’s climate was much more suited to winegrowing than parts of the East. The desired Vitis Vinifera could be grown there, and many wineries were founded in the Golden State between the 1850s-1870s. This development made California the wine growing center of the United States.[4]

For a while most of the California-grown wine didn’t leave the West Coast, however in the 1870s a tax on imported wine was raised making California wine a better option cost-wise compared to importing European wine, so U.S. wine began making its way East. California wine came to dominate the U.S. market for several decades and by the 1910s 90% of the wine consumed in the U.S. came from California.

Wine consumption grew overall during this time as well, partly because of immigration. Around the turn of 20th century an influx of immigrants came from places like Italy and other Mediterranean countries. These immigrants came from wine drinking cultures and their desire for inexpensive table wine helped fuel the market. [5]

These gains were halted though with the implementation of Prohibition in 1919. Most states had gone “dry” by this time from the influence of the Temperance Movement, but in 1919 the Volstead Act banned the production, sale, and importation of “intoxicating liquors” nationwide. However, under the Volstead Act wine could still be made for medicinal and sacramental uses, and up to 200 gallons a year could be made by families strictly for use in the home. Until the repeal of Prohibition in 1933, winemaking in America became a home affair and wineries switched their focus to producing grapes. California experienced a vineyard planting boom during this time, and the state’s grapes were shipped across the country so people could make their own wine.[6] There was not much of a focus on the quality of grapes during this time, rather growers were concerned with producing the greatest quantity of hardy grapes which could be shipped for consumers to use.

The affects of Prohibition were long lasting in the American wine industry. When Prohibition ended, commercial winemaking had been dormant for about 13 years, so American winemakers lost the know-how of making wine and were behind in the advances that had been made in the industry.[7] The quality of American wine lagged far behind wine from other parts of the world. The U.S. was in the midst of the Great Depression and the economic difficulty of the time made it hard to restart the industry. Having become used to not consuming alcohol many American consumers were simply not interested in alcohol for a long time too.

Prohibition also created an image problem for American wine. Wine was viewed as just another form of cheap alcohol, something that was “made in a bathtub.” For decades there was a perception that any fine wine was imported, while domestic wine was cheap and second-rate. It didn’t help that by the 1950s American wines often had funny sounding names like Thunderbird and Cold Duck.[8]

This perception began to change in the 1960s as an interest in wine increased amongst consumers. The industry had improved technologically by this time as well. Processes like cold fermentation and using stainless steel and pure yeast cultures created wines that tasted better. With a better product and greater interest, another vineyard boom took place, mainly in California.[9]

The key moment in the improvement American wine’s reputation took place in 1976 in what is now known as the Judgement of Paris. In a blind tasting competition expert French judges tasted French wine, considered to be the best in the world, and California wines. In each category the judges ended up picking California wines as better than their French counterparts. The event caused quite a stir in the wine world and signaled that American wine had improved and was now comparable to the best wines in the world.[10]

From then on winemaking in the U.S. continued to grow. Today, the United States is the fourth largest wine producer in the world behind Italy, France, and Spain. Wine making is a $220 billion industry in the U.S and winemaking occurs in all 50 states. Although the vast majority of wine production still takes place in California, states like Washington, New York, Oregon, and Texas have thriving wine operations too and round out the top five producing states.[11] The United States has also become the largest consumer of wine within the past few years. After centuries of trial and error, American winemaking can finally raise a glass to its success and make a toast to its continual progress.

She lost her hair battling cancer. Her son grew his hair out for her wig

Hiking bunny in NH turns heads on the trail