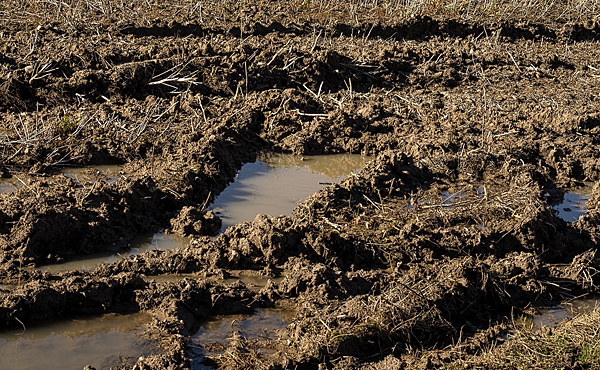 HORNTOWN, Va. — It’s no secret it’s been a wet winter in Virginia. As of Feb. 25, the U.S. Department of Agriculture’s crop progress report estimated 82 percent of the state’s topsoil had surplus moisture.

In addition to creating muddy pastures and cropland, the weather has started to seriously delay farm operations.

“Some growers across the state are saying they’re as much as two months behind” in preparing cropland for planting, said Robert Harper, Virginia Farm Bureau Federation grain marketing manager.

In Accomack County on Virginia’s Eastern Shore, “we’re about a week behind our normal start of planting, and we need about two weeks of good drying weather to get caught up,” said potato and grain producer David Hickman, a member of the VFBF board of directors. “And they’re calling for more rain this weekend, so who knows when our fields will be fit to plant.”

Hickman said Virginia potato growers are concerned, but their counterparts in North Carolina are a full month behind their normal planting time because of wet fields. That affects Virginia growers, because the potato harvest is staggered as the season moves from south to north each year. If North Carolina potatoes hit the market at the same time as Virginia-grown spuds, prices will suffer.

“If we have good growing weather once the potatoes are planted, normally we can make up some of this lost time,” Hickman said optimistically. “But there’s a lot of water standing in the fields over here right now. We’ve had two days of fieldwork since probably the second week of December. That means no spreading of manure or top-dressing wheat; the fields are just too wet to put equipment in.”

Last year was the wettest on record for neighboring Northampton County, and the winter wheat crop has suffered a lot of stress, noted Ursula Deitch, a Virginia Cooperative Extension agent in Northampton. Nutrient losses and potential disease issues from wet weather threaten to have a major negative impact, she reported.

It’s just as wet farther west in Appomattox County, and farmers there are worried about ripple effects into next fall.

“So many people couldn’t get their small grains in last fall, so now they’re worried about having grain for their feed or forage crop for this season,” said Darrell Roach, an Appomattox County cattle and grain producer. “They’re going to be short on feed for this coming fall. And there’s a lot of folks with hay stored in staging areas, but it’s so wet they can’t get it out to feed the cattle.

“We aren’t delayed on summer crops yet. We’re about three weeks from planting, and I’m hoping we’ll get dry enough to start on time,” Roach said. “Still, all the feeding areas for cattle are all mucked up. Folks are upset about that. They haven’t been able to clean them up. It’s a big mess for sure.”

Grant deadline near for conservation projects