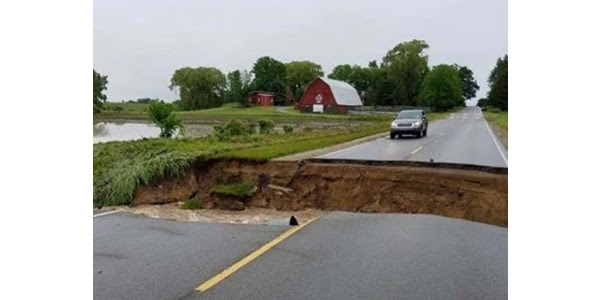 LANSING — In a matter of weeks, or some cases – days, many mid-Michigan farmers went from concerns of drought to wondering if they’ll have a crop to harvest this fall because of too much rain. Heavy rains Thursday night may have dealt a final blow to many farm fields, specifically those in Midland and Isabella counties.

According to Mark Sterling, Michigan Farm News Ag Weather Forecaster, flooding rains for much of Mid-Michigan where 72-hours totals over 8 inches have been recorded and 7-day totals of 12 inches of rain in parts of Isabella and Midland counties, have flooded farm fields and washed out roads. Elsewhere, he reports, areas throughout the Saginaw Valley and the Thumb have recorded 7-day totals of 10 inches or more.

Sterling says that for the month, Breckenridge has recorded 7.08 inches but it gets worse just north of town. “A significant number of fields are under water this morning,” he said. “Just north of Breckenridge a few miles conditions are so much worse and that goes well up into Isabella and Midland counties.

Ironically, says Michigan Farm Bureau Field Crops and Advisory Specialist Kate Thiel, the sporadic rain patterns are creating quite a contrast between growers, with many growers still praying for rain elsewhere across the state.

“While the amount of precipitation that’s fallen over the last 7 days has wreaked havoc on crops and damaged a great deal of infrastructure in mid-Michigan, the Saginaw Valley and Thumb areas of the state, it’s hard to believe that some parts of Michigan are hurting for rain, but it’s a real concern, Thiel said.

Adding that the weather is an element that’s totally out the control of the farmer, Thiel said these are particularly trying times for many crop producers across the state – but clearly demonstrate the importance of maintaining crop insurance as a risk management tool – something farmers hope to continue having access to.

“Many farmers have some difficult choices to make in the coming days as the window of time for replant gets shorter due to drowned crops – while other farmers, depending on location, are worried the rain, when it does come will be too little – too late,” Thiel said. “Some crops are more naturally hearty, like sugar beets and corn, others like dry beans and soybeans really don’t like wet feet, so the amount of damage done by this inundation of water may be greater.”

Ray VanDriessche, Community and Government Relations Director for Michigan Sugar Company, reported similar rainfall totals for the cooperative’s growers located predominantly in the hardest hit areas. Many of the growers were reporting rainfall totals of 3.6 to 4 inches of rain Thursday night – that’s on top of 6 to 7 inches they received last weekend.

With rainfall totals approaching 10 or more inches in the past seven days, he expects some losses to sugar beets grown in the region, particularly in the low-lying areas if water stands for more than three days, causing root rot.

“My heart goes out to those growers that have seen 10 to 11 inches of rains over the past week,” VanDriessche said. “But sugar beets are a pretty tough crop. The cloudy and cooler weather conditions forecast over the next several days may help minimize potential losses.”

While flooding is not good news for any crop, Michigan dry beans are particularly vulnerable to root rot due to the excess moisture. Joe Cramer, executive director of the Michigan Bean Commission and Greg Varner, research director for the commission, say that while the outlook isn’t good, it’s hard to tell what amount of damage was done until more time has passed.

They reported that many dry bean producers had been waiting since last weekend’s heavy rains for things to dry out enough to make an educated replant decision. That decision could become much more complicated now.

If the damage is widespread enough, the race against the calendar will be challenged by the availability of shorter-day dry bean varieties based on the abnormally late season planting. Beyond timeliness and availability of seed delivery, waiting for field conditions to dry enough to allow replanting will be the ultimate deciding factor.

According to Varner, there is a shorter day variety of black beans available that might be shipped into Michigan, which could allow for planting through July 4, adding that individual farmers need to weigh all of these factors on a field-by-field basis to make a replant decision.

“Big picture industry concerns – we won’t have answers until late August in terms of quality and overall supply issues, until we near dry bean harvest,” Cramer said. “Depending on the outcomes the ramifications could be long-lasting as Michigan has long been known nationwide as a strong supplier of high quality dry beans.”

Sterling predicts that while Saturday and Sunday will see plenty of dry weather there’s still the chance of afternoon showers and or a storms.

“With cold air aloft we could see some of the stronger scattered showers or storms capable of producing some small hail,” Sterling warned. “Cool weather will last into the middle of next week. Then late next week we will see the warm air try to return and, yes, more thunderstorms will be possible as the warm front moves back towards the Great Lakes.”