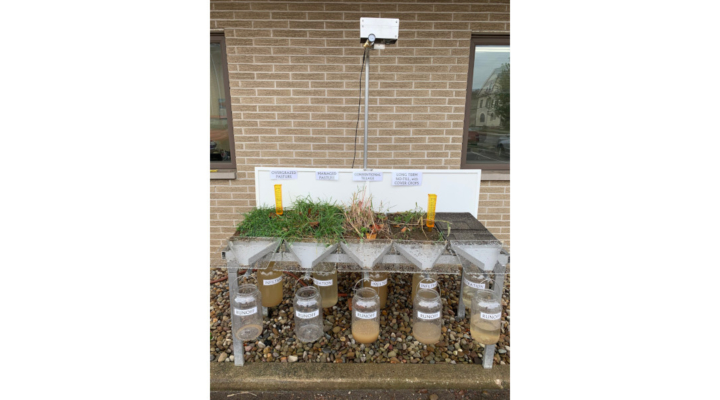 Making it rain: A rainfall simulator brings home the effect of a 2” rainfall event. The simulator offers a great visual representation of the ways in which different land use and farming practices affect run-off and infiltration. (Courtesy Photo)

MILLERSBURG, Ohio — If a simple picture is worth a thousand words, then a new piece of educational equipment that Holmes Soil and Water has been demonstrating is worth a million! The “Rainfall Simulator” is an unassuming assemblage of sheet metal, pipe and plastic that looks more like a space-age potter’s bench than a teaching tool; but once the “rain” begins to fall eyes widen and the questions and comments begin to fly!

“When we run this demonstration in front of kids it’s an instant lesson,” says HSWCD Water Quality Specialist Joe Christner. “They immediately see the difference between run-off and infiltration.”

When agricultural producers watch the rainfall simulator an even greater lesson can hit home. The simulator spreads “rainfall” by uniformly spraying across five different, side-by-side examples of ground cover. The samples, taken from local fields, each represent a different management practice. Clear collection jars beneath each sample show the amount and clarity of both run-off water and water that has infiltrated into the soil. Alongside a sample from a conventionally tilled field you’ll find one from a long-term no-till field. Beyond that you’ll find a sample with a history of cover cropping. Rounding out the set-up are a pair of samples that typically get the most dramatic reaction from farmers.

“The difference in run-off, infiltration and water quality between a well managed pasture and a pasture that has been over-grazed is a real jaw-dropper,” said Christner. “The amount of rainfall absorbed by a well-manage pasture, along with the clarity of the tiny amount that does run-off, are real eye-openers.”

Christner goes on to explain that in addition to more ground cover and a more extensive and diverse underground network of rain-absorbing roots, the well managed pasture sees less continuous foot traffic—an important factor in soil compaction. Compaction limits the ability of roots to penetrate the soil.

“These demos are a great tool to get producers thinking about adopting methods that can reduce run-off and erosion in the near-term,” said Christner.  “At the same time, making even small changes in tillage or management practices can lay the groundwork for increased soil health which can pay long-term, bottom line dividends.”

Soil health has become an area of increasing focus over the past several years. Healthy soils—those with abundant microbial activity and substantial soil organic matter—not only decrease run-off volume through infiltration, but they also sequester more carbon from the atmosphere. Pollinators and wildlife benefit from healthy soils as well. As rainfall events grow in intensity, more attention is being paid to the ability of healthy soils to help manage increased volumes of stormwater.  For the producer, healthy soils can mean better yields with fewer inputs.

Funded partially by a grant from the Muskingum Watershed Conservancy District, the balance of the cost of the rainfall simulator was shared among several Soil and Water Conservation Districts in the region. This partnership allows the unit to be available for demonstrations throughout southeastern Ohio for events like county fairs, agricultural field days, farm tours and school science programs. If you’re planning an event where a demonstration would be appropriate, please give Holmes Soil and Water a call at 330-674-2811 or email us at holmes.swcd@gmail.com. You can find more information on the rainfall simulator along with plenty of photos on our website www.holmesSWCD.com and be sure to visit and “like” our Facebook page at “Holmes Soil & Water Conservation District.”

Working together is the heart of dairy