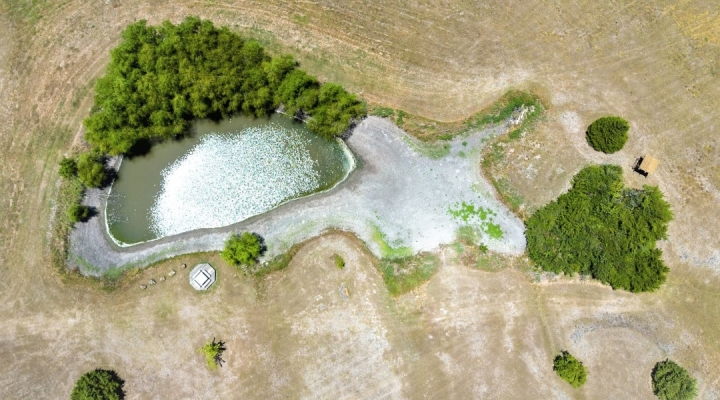 Low stock tank levels around the state were a major concern for cattle producers around the state. While rainfall across Texas helped many areas, surface water availability remained an issue as drought conditions continued. (Texas A&M AgriLife photo by Courtney Sacco)

COLLEGE STATION, Texas — Rainfall across Texas and cooler temperatures provided agricultural producers some relief from drought and extreme heat over recent weeks, but most areas remain in a moisture deficit, according to the Texas state climatologist and Texas A&M AgriLife Extension Service agronomists.

John Nielsen-Gammon, Ph.D., state climatologist in the Texas A&M College of Geosciences Department of Atmospheric Sciences, said most areas of the state received above-average rainfall during August but were still behind average rainfall amounts for the year.

“We’ve seen drought contraction across the state, and last week’s rainfall should show improvement in the upcoming drought monitor later this week,” Nielsen-Gammon said. “But the rain is over for now. It looks like we’re now entering a dry stretch and have seen all the improvement we are going to see for a while.”

The most recent Texas drought monitor map produced by the National Drought Mitigation Center at the University of Nebraska shows reduced drought conditions around the state. The Drought Severity and Coverage Index, DSCI, which ranges from 0-500 and calculates the cumulative drought data for an area, showed the drought peaked at 380 on Aug. 8. The DSCI was 251 on Sept. 1.

Nielsen-Gammon said rainfall amounts were highly variable across much of the state. The wettest parts included a swath between Del Rio and the Lower Rio Grande Valley and the area between Fort Worth and the Arkansas/Louisiana border. The Texas Panhandle picked up the least amount of precipitation over the past 30 days.

The East Texas town of Zavalla between Lufkin and Jasper received the most rain during the month – 17.65 inches, Nielsen-Gammon said. Ferris, just south of Dallas, reported 16.65 inches while Corpus Christi and Houston both picked up more than 14 inches.

Noland said an important aspect of the recent weather was that the storm systems delivered cooler temperatures and cloudy days along with the rainfall. That contrasted to the limited rainfall received earlier in May and June, which was quickly lost to hot and windy conditions.

Areas around San Angelo received 1.5-9 inches of rain, and temperatures dropped into the upper 80s for daytime highs and 60s at night with cloudy days.

“I had 2 inches of rain on a field in late May that never infiltrated more than 3 or 4 inches down and had dried out completely within a couple days,” he said. “This time the rain was able to soak in, although the subsoil is still depleted. In many areas, we have decent moisture down to 6 or 8 inches, but below that is still dry. We’re still in an extreme moisture deficit, and it will take repeat rain events to change that.”

Nielsen-Gammon said a La Niña weather pattern is expected to hold through fall and winter, which means below average precipitation and above-average temperatures for Texas historically. The above-normal expectations for hurricanes and tropical storms could deliver moisture, but those storms typically bring destruction as well.

“We haven’t reached peak hurricane season, and we are up to ‘E’ with a few storms brewing, but it seems we’ve avoided a very active season,” he said. “It’s even more important that no hurricane landfalls have occurred. We’re better off with a widespread rain to break the drought, but weather patterns don’t appear to be cooperating following the second hottest summer on record.”

The arid conditions took their toll on most dryland crop acres, and irrigated fields struggled to keep up with plant water demands over the course of the growing season, according to numerous AgriLife Extension reports.

Bell said the recent rainfall was in time to help finish out irrigated crops like corn and grain sorghum, which are in the kernel fill stage, and should benefit boll development in cotton.

But the rainfall amounts around the Texas Plains were scattered and variable, she said. In areas that received heavier rains, the higher amounts in a short time did not allow for incorporation into the soil profile.

“Where higher rates were received, rainfall rates were often in excess of the soil infiltration rate so the rainfall was not as efficient as it would have been if received over several days,” she said.

Schnell said most areas in his region received 2-4 inches of rainfall, while some areas picked up several inches more. The moisture will help recharge the soil moisture profile and producer optimism but was far from enough to break the drought.

All warm-season crops were harvested or beyond any stage where moisture would benefit them, he said. But the rains should help cool-season small grains like oats and wheat. Pastures and rangelands were already showing signs of improvement and should help grazing and late-season hay production as well.

“Right now, producers are glad for the rain and cooler temperatures, but when you hear the long-term outlook is on the drier side, it’s something we have to keep in mind as we plan for next season’s crop,” Schnell said. “Good grain and commodity prices add to the optimism, but input costs are high as well, so it’s about having really good yields along with really good prices, and we need the weather to cooperate for that to happen.”