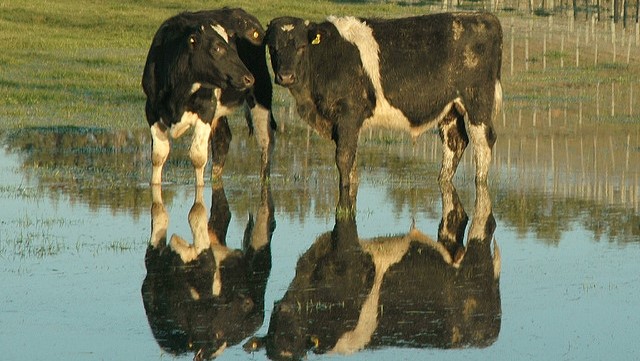 Areas in and around Corpus Christi received some of the highest rain totals this week, picking up over a foot of rain. (Ari Bakker, Flickr/Creative Commons)

WASHINGTON — Conditions so far this week across the Plains and coastal Texas have been very wet, trending well above normal. In Texas, tropical moisture, but not a tropical system, brought heavy rains and flash flooding to areas from Houston to Brownsville with some rains expected to continue into today, Thursday. Areas in and around Corpus Christi received some of the highest rain totals this week, picking up over a foot of rain. Although the rains will certainly improve drought conditions along the Texas coast, the dry soils in combination with the rapid rainfall rates actually compounded the rain’s impact. Areas around Houston also received some large rainfall totals and flash flooding, bringing back memories from less than a year ago when Hurricane Harvey dropped around 60” of rain in just a few days. The Beaumont/Port Arthur area, which is along the coast and just north of Houston, received nearly 6” of rain in 24 hours earlier this week, breaking the existing daily rainfall record. While some rains are still in the forecast for the Texas coast today, totals are expected to be much smaller. Conditions over the weekend are also forecast to trend on the dry side which will allow waters to recede.

Areas from northern Kansas to southern South Dakota and over to northern Indiana have also seen a rather wet week so far, although not nearly as much rain as the Texas coast. Between Monday and Wednesday, a couple inches of rain fell across the region, with additional heavy rains in the forecast for northern Iowa, southern Minnesota, northern Illinois, and Indiana today (Thursday). Showers could extend into tomorrow (Friday) as well, but a bulk of the moisture should move off to the East and allow for a drier weekend. While some rivers and streams are already near or exceeding flood stage due to rains earlier this week as well as runoff, today’s rains are expected to cause some additional flood hazards in states like Iowa and Illinois. 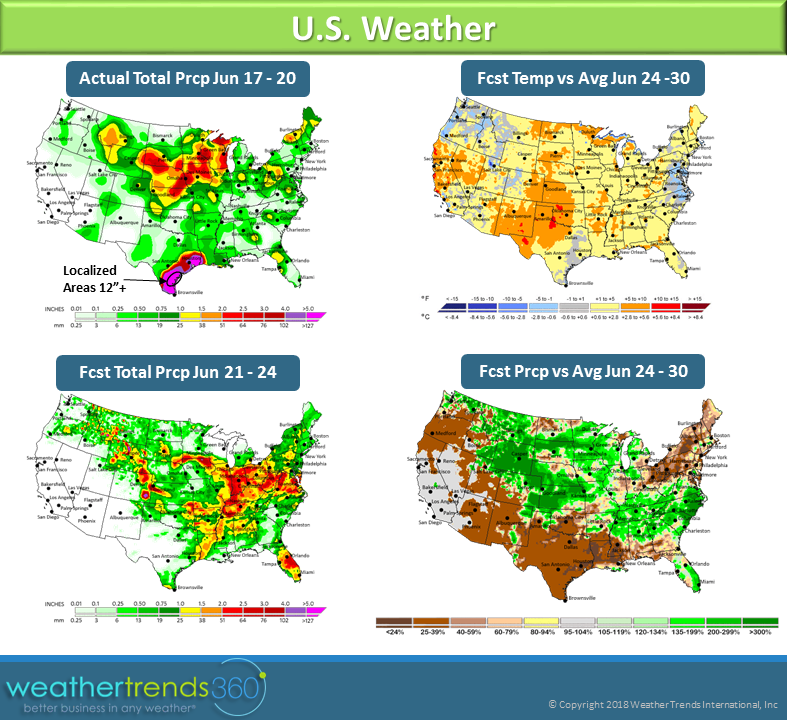 Looking ahead to next week, another wetter than normal week is in the forecast for the Plains and the Southeast while the Northeast and South Central trend more on the drier than normal side. Temperatures during the last week of the month will be generally a bit above normal. Areas of the South Central and Southwest, could see weekly average temperatures trend 5-10F above normal. The heat and dryness will do little to aid in the persistent drought conditions in this region. Since last week, there has been some small improvement see in the Texas Panhandle as well as in western Oklahoma and southwestern Kansas, but widespread extreme drought conditions persist across Arizona, New Mexico, southern Colorado, and southeastern Utah. Abnormal dryness and drought conditions since last Tuesday (6/12) also improved in areas of Minnesota, North Dakota, and South Dakota. Severe drought conditions expanded in northern Missouri, while abnormal dryness saw some expansion in parts of New England. Along the West Coast, dryness and drought conditions were relatively unchanged.

200 poisoned by pesticides in Azerbaijan