Home / National / Quieter week ahead after storms pass
A new user experience is coming! We'll be asking you to login to your Morning Ag Clips account March 1st to access these new features.
We can't wait to share them with you! Read more here. 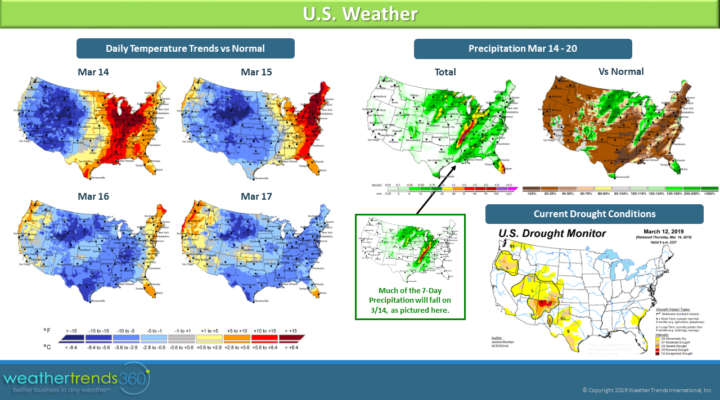 WASHINGTON — A strong storm system will continue to impact a large portion of the U.S. on Thursday. As of 8 a.m. Eastern Time Thursday, blizzard warnings remained in place for parts of the Upper Plains, flood warnings for the central Plains and western Midwest and high wind warnings and/or wind advisories were active across the Plains and Midwest. Some portions of eastern Tennessee, northern Mississippi and eastern Arkansas were under a Tornado Watch.

Thursday is expected to be a very active weather day from the Plains to the Midwest and into the Gulf Coast. As of writing, strong or severe thunderstorms have the highest chance of occurring over portions of the Tennessee and Ohio Valleys, as well as into the southern Great Lakes region today. These storms will have the potential for damaging winds, hail and could even produce some tornadoes.

This system will push forward northeastward throughout the day and weaken over the next several days. By later today, conditions in the Plains are expected to improve somewhat, especially with regards to the strong winds that have been battering the region. The East Coast is currently expected to largely miss out on the treacherous weather, but showers and some thunderstorms are in the forecast especially in the Southeast for Friday.

Temperatures ahead of the system will be warmer to much warmer than normal, providing many with an early taste of spring temperatures. The East Coast will enjoy a couple days with temperatures well above normal before cooler trends settle back in over the weekend and into next week. Although cooler than normal temperatures return to the central and eastern U.S. over the weekend, precipitation is largely going to trend below normal across the country through at least the middle of next week. 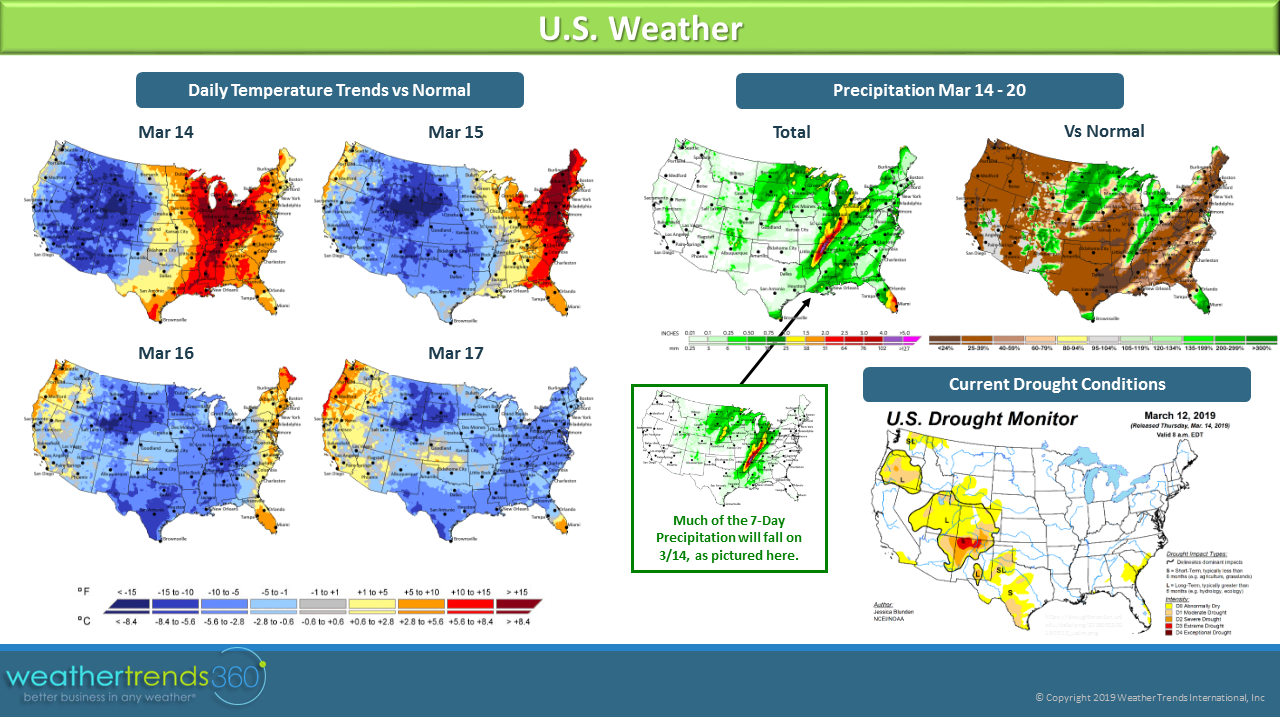 Drought conditions in the West have improved significantly from the start of the year, while some abnormal dryness or moderate drought conditions have reappeared in portions of Texas. Currently, about 78 percent of the U.S. is free of drought or abnormally dry conditions, a nearly 4.5 percent improvement from last week. Compared to last week, a large portion from eastern Oregon into Colorado noted a one category improvement to dryness, with much of Nevada and Idaho no longer being classified as abnormally dry. The worst drought conditions are currently contained to northern New Mexico where only a small portion of the state is still experiencing severe or exceptional drought conditions, 0.57 percent of the U.S. to be exact.