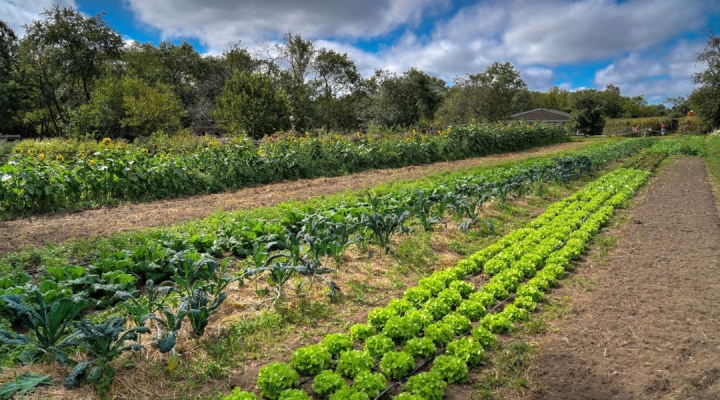 QUEENS CO., N.Y. — Queens County Farm Museum announces its largest agricultural expansion in over fifty years as it begins its 325th anniversary of continuous farming in 2022. The expansion includes cultivating an additional five acres of land by 2025, investment in the farm’s Urban Agriculture Workforce Development Program, strengthening upstate/downstate agricultural partnerships, introducing year-round growing techniques, an expansion of its livestock program and the creation of a controlled-environment agricultural showcase to contribute to New York City’s urban agricultural curriculum. This announcement comes off the heels of New York City’s $26 million investment in Queens Farm’s Education Center, the first new construction on the historic site since the 1920’s.

To spearhead this unprecedented expansion, Queens Farm has hired Daniel Morales as Queens Farm’s Director of Agriculture and Christina Leung as the farm’s Farm Manager. Mr. Morales and Ms. Leung represent the next generation of farmers in New York City making the parallel of their training and experience against the historic site all the more important. As a key component of the expansion, their leadership will also reshape Queens Farm’s Urban Workforce Development Program in collaboration with GrowNYC to serve the needs of apprentices as they navigate New York City’s burgeoning new agrarian economy to create a green workforce.

Daniel Morales, a Queens native, joins Queens Farm with seven years of diverse farming experience including entrepreneurial startups at Rigor Hill Farm in the Hudson Valley, Shekomeko Farms in Dutchess County, and training at the nationally recognized experimental market garden, Four Season Farm in Maine, where he learned the craft of small-scale year-round growing from organic farming icons Clara and Eliot Coleman. He has a BS in Environmental Studies with a Concentration in Ecosystems from Binghamton University.

Queens Farm is one of the longest continually farmed sites in New York State, dating back to 1697.  In 1900, Queens Farm was the second largest farm in Queens and the highest ranked in value. Today, the 47-acre site is the largest tract of farmland, home to the single largest apiary and the only farm with a full range of livestock in New York City. It recently annexed 1.6 acres of land from New York State that was part of the farm’s original footprint in 1697.

Queens Farm implements regenerative farming methods and grows over 200 varieties of fruits, vegetables, herbs and flowers making it a leader in hyper-locally grown food and the ecological wellbeing of New York City. Its Farm Store and on-site and off-site farmstands connect New Yorkers to the farm’s harvest including fruits, vegetables, herbs, honey and eggs; and New York State agricultural products. The farm is open to the public with free admission 354 days per year and welcomes over 500,000 annual visitors from every zip code in New York City and beyond. Queens Farm’s unique public education and programming support New Yorkers of every age and income level.

“325 years of continuous farming  in New York City is quite an accomplishment,” noted Jennifer Walden Weprin, Executive Director of the Queens County Farm Museum. “Queens Farm is on the precipice of exponential growth to expand public service through increased food production, job training, employment opportunities, education and cultural programming. We are excited for this journey.”

“New York Farm Bureau values the partnership we have with Queens Farm, an important connection between upstate and Long Island farmers and the more than 500,000 visitors every year to the historic 47-acre working farm and museum. We congratulate Queens Farm on 325 years and its continued growth educating urban New Yorkers about agriculture and showcasing the importance of having a strong regional food system,” said Jeff Williams, New York Farm Bureau’s Director of Public Policy.

“What an incredible anniversary—325 years! Many congratulations to Queens Farm on this milestone, as well as on their 5-acre expansion and for selecting both a new Director of Agriculture and a Farm Manager,” said Marcel Van Ooyen, President and CEO of GrowNYC. “We look forward to working together with Queens Farm in our effort to bolster a new urban agriculture workforce development program.”

“As a dairy co-operative which is owned by hundreds of farm families located throughout New England and New York State, we are honored to support the mission of Queens Farm as they celebrate the amazing milestone of their 325th Anniversary,” said Kelly Littlefield, Director of Brand Promotion of Agri-Mark/Cabot.

“Queens Farm has been continuously farmed for over three centuries as New York City grew around it,” stated James Trent, Board President of Queens County Farm Museum. “This new expansion, as we celebrate our 325th anniversary, is a significant milestone as we continue our work to serve the public.”

Queens Farm is shortening the distance from farm to fork while expanding access to farm fresh food, increasing opportunities for local food work and bolstering a green workforce as New York City works toward the aggressive goal of Zero Waste by 2030. Queens Farm’s historic agricultural expansion comes at a time when there is renewed focus on urban food systems and nutrition in New York City. New York City Mayor Eric Adams has made it a focus for his administration setting the groundwork as early as February 2021 with his report The New Agrarian Economy.

Queens County Farm Museum’s 47-acre site showcases the 300-year history of agriculture as a way of life in New York City connecting people to agriculture and the environment. Queens Farm is a New York City Landmark and on the National Register of Historic Places. It is located at 73-50 Little Neck Parkway, Floral Park 11004. Visitor information can be found at queensfarm.org.