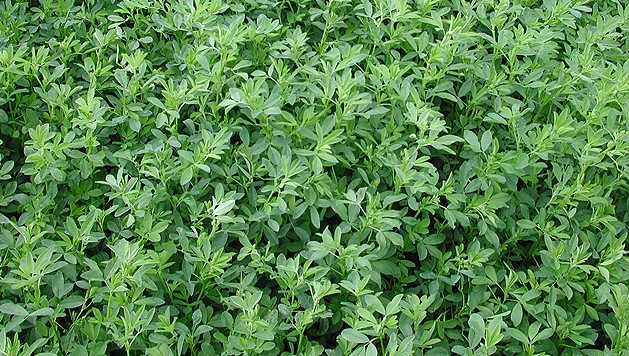 WASHINGTON — Alfalfa is often called the “Queen of the Forages” due to its high yield, feed quality for ruminant animals, nitrogen fixation and pollinator habitat among other environmental services. But this royal member of the legume family is no match against the host of microbes that cause the disease complex known as “crown rot.”

Chemical controls aren’t effective against crown rot, and there are no genetically resistant alfalfa varieties available to farmers. Now, a team of Agricultural Research Service (ARS), University of Minnesota (UM) and Donald Danforth Plant Science Center (DDPSC) scientists is exploring a “surrogate” defense—one borrowed from a close relative of the $8 billion legume crop.

According to Debby Samac, a plant pathologist who leads the ARS Plant Science Research Unit in St. Paul, Minnesota, crown rot damages the cells at the junction of the stems and roots (the “crown”) of alfalfa plants, typically after the first couple of harvests. Such attacks reduce the number of stems and the ability of the plant to store carbohydrates, diminishing yields and winter survival.

Fungicides registered for use on alfalfa don’t persist on the roots or crown long enough to prevent the disease, which occurs in all states where the crop is grown for hay, livestock forage, feed or other uses.

Efforts to develop commercial varieties with resistance using conventional plant breeding methods have so far fallen short. That, in turn, has limited farmers’ options for managing crown rot and minimizing their losses. In the absence of resistance genes from alfalfa, scientists turned their attention to barrel medic, a clover-like relative whose leaves produce small, antimicrobial proteins called defensins.

According to Samac, who teamed with Andrew Sathoff, a former UM graduate student researcher now at Dakota State University, and Siva Velivelli and Dilip Shah—both with DDPSC—alfalfa produces defensins in seeds, and these defensins have been used to protect potato plants from fungal diseases. However, the defensins from alfalfa, spinach and tomato that the researchers tested either did not inhibit growth of alfalfa crown rot pathogens or had limited activity. Instead, they needed a defensin that inhibited many fungal and bacterial pathogens—and barrel medic fit the bill.

To get started, the team identified the amino acid sequences of defensins produced by barrel medic and synthesized their core motifs, or essential elements. They then exposed spores of fungal pathogens and bacterial cells to small concentrations of the defensins to learn what effect this had on the microbes’ growth and survival.

One of the defensins tested proved more potent than the others used against the crown rot pathogens, which included Phoma medicaginis, Colletotrichum trifolii and Fusarium fungi, as well as Pseudomonas syringae and Xanthomonas alfalfae bacteria.

The results, published in the September 2018 issue of Phytopathology, illustrate how resistance characteristics in plants related to alfalfa can be potentially useful in protecting the crop from disease.