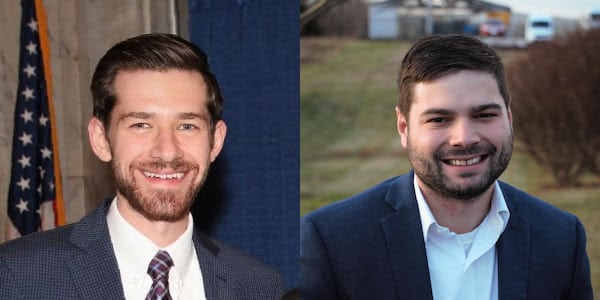 Southard, left, was named by Quarles to serve as the KDA's director of public affairs. Herbert, right, was appointed to serve as special advisor to the Commissioner. (Courtesy of Kentucky Department of Agriculture)

FRANKFORT — Agriculture Commissioner Dr. Ryan Quarles announced key appointments and staffing changes for his executive team for his second term at the Kentucky Department of Agriculture (KDA). Quarles has appointed Sean Southard as director of public affairs and Gus Herbert as a special advisor.

“I am forever grateful to the people of Kentucky for allowing me the opportunity to serve them as Commissioner of Agriculture,” Commissioner Quarles said. “I trust my senior staff to help carry out the agenda I campaigned on: putting Kentucky first. Over the past few years, Sean and Gus have demonstrated leadership and provided sound advice to me and the Department. I am excited they will help us continue the momentum going forward.”

As the director of public affairs, Southard will help manage the Department’s policy portfolio. He will retain his responsibilities as KDA’s director of communications.

“Over the past two and half years I have seen firsthand how important state and federal policy can impact Kentucky agriculture,” Southard said. “I look forward to the challenges and opportunities this expanded role offers. It is a great privilege to serve the people of Kentucky and to continue communicating Commissioner Quarles’ agenda.”

Southard began his public relations and public affairs career at RunSwitch PR, where he developed and executed messaging strategies for clients such as Amazon.com, Kentucky Farm Bureau, and political candidates and organizations. Southard is a graduate of the University of Louisville. An Owensboro native, he currently resides in Louisville.

As a special advisor, Herbert will help oversee the Department’s initiatives, legislative agenda, and community relations.

“I am honored to serve the Kentucky Department of Agriculture in this capacity and I look forward to helping realize Commissioner Quarles’ vision for Kentucky,” Herbert said. “From having spent time with him over the last five years, I know he is genuinely motivated by a desire to make life better for Kentucky families.”

Previously Herbert led Commissioner Quarles’ successful reelection campaign. Prior to that, Herbert served as an aide to the Commissioner. He brings nearly a decade of grassroots campaigning and public affairs work to the Department. Herbert is a graduate of The College of William and Mary. He and his wife Kristen, a school teacher, reside in Louisville with their newborn son.

Submit your 'AgGrad 30 Under 30' nominations today