Home » Quail population on comeback thanks to habitat restoration 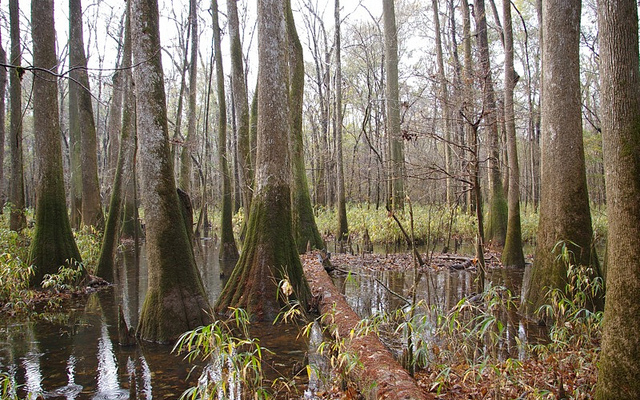 WHITMIRE, S.C. — Jackie and Bobbie Rogers of Woodruff miss the days when they could hunt quail on their 500-acre farm.

“It’s been between 20 and 30 years since we’ve had a huntable population,” said Jackie Rogers of Woodruff. “There was a time when I could go out on my property and shoot enough quail for us to eat, but not anymore. Urban development has come in around us and changed their habitat.”

That’s why the Rogerses joined other landowners for the 13th annual Indian Creek Field Day March 27 to learn how to maintain forestlands to promote wildlife habitats.

The landowners met with forestry and wildlife specialists from Clemson Extension, the South Carolina Department of Natural Resources, the National Wild Turkey Federation, the United States Department of Agriculture National Resources Conservation Service, the United States Forest Service and the South Carolina Forestry Commission for a tour of the Indian Creek Restoration Initiative.

Jackie Rogers said he would like to see the quail population make a comeback. He said not only has urban encroachment changed the quail habitat, it has changed agriculture altogether.

“Land that was once planted with alfalfa and other grasses or row crops that could serve as quail habitat have been covered with concrete,” he said. “One of the best wood duck ponds in the county is now filled with concrete. Everything has changed and we’re here to find out what we can do to help bring back quail and wildlife to our property.”

The Indian Creek Restoration Initiative began on 16,000 acres of land (8,000 acres on private lands and 8,000 acres of national forest) in the early 2000s and has expanded to include a 40,000-acre area around Whitmire. Its primary objective is to enhance habitat improvements for species that depend on properly managed woodlands, savannahs and grasslands, said Jeff Fellers, a Clemson Extension agent for forestry and natural resources. Improving the habitat of bobwhite quails has been one area of focus.

“We’ve seen an increase in the number of quail covey counts since this program was implemented,” Fellers said. “This program involves a variety of organizations and people working together to promote forest health and wildlife habitat improvements. It seems to be having a positive effect.”

Michael Hook of the South Carolina DNR said numbers do show the program is working.

“Fall covey count is up 162 percent since 2005,” Hook said. “The whistling bobwhite quail survey is up 75 percent since 2005. I think there have been some great changes on private lands that make the numbers look even better.”

Throughout the Indian Creek Field Day, the Rogerses and other field day participants toured areas around Whitmire that have been engaged in the Restoration Initiative. The first stop was at the Long Lane Timber Management and Wildlife area, a forest management operation that uses timber harvest as a tool for wildlife management.

“We incorporate wildlife objectives in our forest management plans, and having a plan is important,” said Tarri McKinney, a U.S. Forest Service officer. “Anytime you want to make changes to a site, you should get site-specific plans so that what you want to do can be maximized.”

Chisolm Beckham of the South Carolina Forestry Commission agreed, adding that connectivity should be an important part of any forest management plan. Connectivity is a term used when multiple landowners manage habitat to increase the footprint across the landscape. Landownership is scattered; someone may own 50 acres beside another person who owns 250 acres, and so on. Connectivity exists in both the structure and function of landscapes. Patches, or areas characterized by vegetation, habitat type and so on, are important parts of landscapes.

“One landowner probably will not have much impact but a group of landowners working together give quail more habitat,” Fellers said. “Connectivity also can provide travel corridors between moderate habitat and great habitat. Even if someone with five acres does a little it may help connect the quail to better habitat on an adjacent landowner.”

In addition to learning about forest management plans, field day participants also traveled to an area on McCullough Church Road that is used to demonstrate how prescribed burning creates healthy habitats for quail.

“When done correctly, prescribed burning is the most beneficial and cost-effective technique to use in quail habitat management,” McKinney said. “Fire is a natural disturbance that, when combined with adequate sunlight, stimulates the growth of native plants that provide food and cover resources for quail, as well as other wildlife species. Fire also reduces fuel loads on landscapes so that we do not experience destructive wildfires.”

When conducting prescribed burns, McKinney said it is important to be aware of where the smoke goes so that is does not cause issues to surrounding communities. Professionals know when to burn based on conditions including wind direction and speed, as well as atmospheric stability. The burns are conducted so the smoke rises quickly and away from populated areas and roads. The S.C. Forestry Commission notes prescribed burns should be conducted every two to three years for stands 15 years and older.

While at the McCullough Church Road site, participants also learned how winter disking is used to manage quail habitats. Winter disking is used to disturb the soil, set back plant succession and maintain a mix of annual and perennial plants, mainly weedy plants. Participants were told winter disking between October and January has been shown to produce a higher percentage of foods, such as ragweed, that attract bobwhite quails. Information from the S.C. Forestry Commission shows landowners should disk one-third to one-half of available areas annually.

Tour participants also visited the Delta site where non-native pastures are being converted to native species of grasses. Proper grazing management of livestock on warm season native grasses is a complementary management tool that can be used to maintain stubble heights along with prescribed burning to develop high-quality grassland bird habitats.

Participants learned how rainfall simulators are used to study runoff and soil loss. They also learned about National Resources Conservation Service cost-share programs and DNR cost-share programs. They received packets of native seeds to plant on their properties.

Kenneth Oswald of Greenwood is a forest landowner and a consultant who attended the Field Day to learn more about preserving wildlife and receive continuing education credits.

“Meetings such as this are really beneficial in helping me keep up with what’s going on,” Oswald said. “I’ve heard a lot about the quail restoration efforts as related to this project and I wanted to find out more. I wanted to see what it’s like on the ground.”

If you missed this Field Day, don’t worry. A similar program is being planned for the Newberry County area in February 2019. For this and other Clemson Cooperative Extension Service events, visit http://bit.ly/ClemsonExtensionEvents.

USCIS today announced the launch of their new website, E-Verify.gov