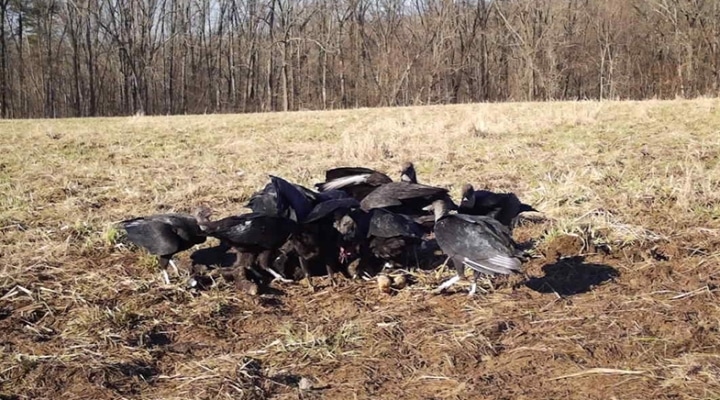 Black vultures (seen here) and other vulture species play important ecosystem services by cleaning up animal carcasses, but some black vultures have become predatory and are causing problems for livestock producers. (Photo courtesy of Marian Wahl)

WEST LAFAYETTE, Ind. — Vultures play an important role in the ecosystem cleaning up animal carcasses from the landscape. However, although primarily scavengers, some black vultures cause problems for cattle operators in southern Indiana, harassing and even preying on young calves and other livestock.

As the spring calving season progresses, Purdue quantitative ecologist Patrick Zollner, professor of wildlife science; doctoral student Marian Wahl; and partners with the USDA Wildlife Services program hope to get help from cattle producers for research into black vulture habits and methods that could be used to stop them from harming livestock.

In other parts of the world, when vultures experienced local extinction, the numbers of animals like coyotes, rats and feral dogs increased and diseases such as rabies, brucellosis and anthrax became problematic for human health, Zollner said.

“These vultures are nature’s garbage disposals. They’re cleaning up the carcasses of dead animals, and that’s an important role,” said Zollner, a professor in the Department of Forestry and Natural Resources. “If they come across a stillborn calf, they’ll eat that. But some of these birds go after young animals or even calves as they’re being birthed.”

Zollner and his colleagues are looking for producers to donate calves that they believe were killed by black vultures so that researchers can perform necropsies on the animals free of charge. Zollner and colleagues hope to learn signs that can determine whether a calf was killed by vultures or simply scavenged.

“We don’t know enough about the biology of these vultures to understand why some birds become predatory or the differences between how they scavenge and how they kill an animal,” Zollner said. “If we can get enough of these predated calves to study, we can learn what evidence is needed to help producers file successful claims to the USDA Farm Service Agency’s indemnity program to receive compensation for their losses.”

The scientists are also looking for livestock producers to complete an online survey, designed by Wahl and Zollner, in collaboration with doctoral student Brooke McWherter and Zhao Ma, a Purdue professor of natural resource social science. Respondents will be asked questions about broad concerns related to livestock losses as well as their experiences with black vultures. Learning more about where black vultures cause damage and how much damage they’re causing will help determine better ways to manage these birds.

For producers dealing with black vultures, Lee Humberg, Indiana state director for the U.S. Department of Agriculture Wildlife Services, suggests first assessing your operation to ensure that it’s not attracting the birds. He said quickly removing any stillborn carcasses (including afterbirth) or dead wildlife can remove food the birds might be attracted to, and taking down dead trees removes a preferred roosting option for the vultures.

Effigies of vultures, including taxidermy birds or those made of artificial materials, hung by their feet near cattle can scare off other birds. Pyrotechnics, cattle dogs and other sources of harassment can frighten some away as well.

“Some of these tactics help,” Humberg said. “But not everything works for everybody. A lot of it depends on the size of the operation and the sensitivity of the birds to your tactics and tools.”

Black vultures are protected under the Migratory Bird Treaty Act, so they cannot be killed without a permit. Humberg said anyone with questions about mitigation efforts or who wants a permit to use lethal force should call the USDA Wildlife Services at 866-487-3297.

To donate a potentially attacked calf, contact Wahl at 317-647-5294. To learn more about the team’s work, visit their website. To participate in the team’s black vulture survey, go here.

Sacrifice area may save grazing resources
May 13, 2021