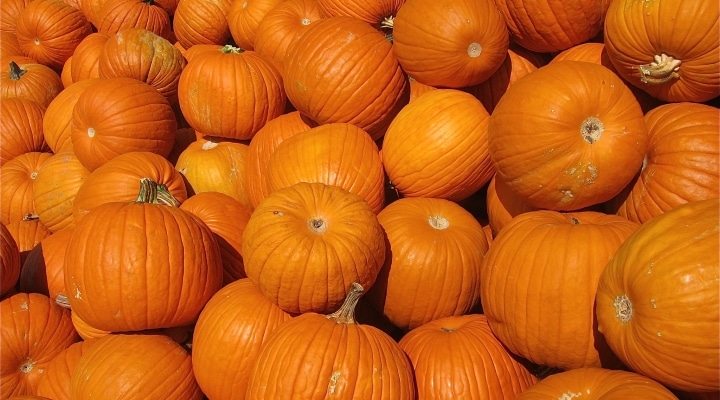 According to the National Agricultural Statistics Service, pumpkins were Virginia’s ninth most valuable field crop in 2019, generating an estimated $14.6 million in cash receipts. (photo by ***Karen, Creative Commons/flickr.com)

CHRISTIANSBURG, Va. — Pumpkins continue to be a popular specialty crop among Virginia farmers, and fall heralds their arrival.

According to a 2019 U.S. Department of Agriculture Economic Research Service report, Virginia pumpkins generated an estimated $16.4 million in cash receipts and were ranked 18th among the state’s agricultural commodities.

“The demand is growing, and it’s a good market to be in—it’s instant entertainment for the fall,” said Chuck King Jr., a Montgomery County farmer and president of the Virginia Pumpkin Growers Association.

King, who grows 30 acres of pumpkins for wholesale with Dan Brann on Brann & King Farms, said this year’s harvest produced “some good, healthy pumpkins.” The farm began picking over Labor Day weekend and already has delivered its first fruits to 20 Walmart stores.

While King noted his crop was “lucky” to avoid the effects of damaging weather that marred much of the pumpkin growing season, he said many producers experienced a different outcome.

“Growers in Southwest Virginia have had awful challenges this season,” said King, who also is a member of the Virginia Farm Bureau Federation Specialty Crops Advisory Committee. “When it’s too hot, you won’t see any fruit, and the vines won’t grow. And if it’s too wet, you’ll get powdery mildew, and the pumpkins won’t grow.”

Danny Cassell, vice president of the VPGA, produces 70 acres of pumpkins in Carroll County. He said he lost about half his crop to wet growing conditions in late summer that interrupted pollination activity.

Mike Cullipher, who cultivates 15 acres of pumpkins on Cullipher Farm in Virginia Beach, said he lost just over 2 acres of his crop due to weather. What’s left, he added, is “very pretty.”

With his entire crop dedicated to U-pick activities, Cullipher is anticipating a busy season.

Among Cullipher Farm’s U-pick produce, which include apples, blueberries, corn, peaches and strawberries, pumpkins have quickly become the most popular.

“People still really care about buying something that’s grown in Virginia or close to home, and I think that’s why the market for Virginia-grown pumpkins is increasing,” Cullipher said. “There’s a saturation point somewhere, but it’s something that continues to grow. As long as the weather allows, it should be something that can continue here for a while.”