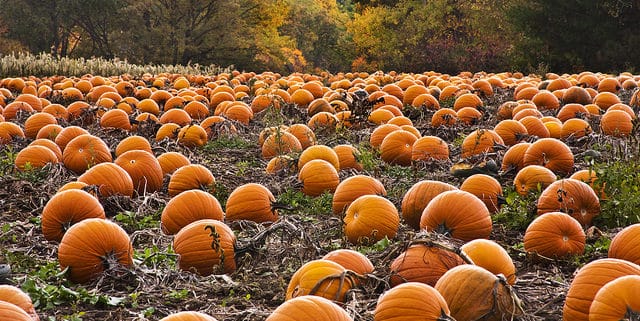 Pumpkin season is here, and farmers are welcoming the public to their U-pick pumpkin patches. (liz west via Flickr)

WYTHEVILLE, Va. — Pumpkin season is here, and farmers are welcoming the public to their U-pick pumpkin patches.

At Williams Orchard in Wythe County, Bobby Williams grows multiple varieties of pumpkins and gourds on 40 acres. He said they’ve had a decent growing season, with plenty of pumpkins ready for people to pick.

“We had some dry weather in the summertime, and they didn’t get quite the size, but they’re good Halloween pumpkins—I just don’t have many of the really big ones this year,” Williams said. “We had some rain that hit just right. There’s a lot of production per acre this year.”

Williams Orchard’s U-pick patch is open through the end of October, and Williams said he’s hoping to recoup some business lost last year because of the pandemic. In addition to a farm stand and maze, “we have a pumpkin chucker that shoots pumpkins a quarter-mile,” he shared.

A member of the Virginia Pumpkin Growers Association, Williams noted that while he’s had a good crop, overall “pumpkins are a little bit short this year,” and the wholesale price for pumpkins is up.

“Some people had an excellent crop, and some had a failure, but overall I think when you plant, lots of times you don’t get a full stand, and plants are not as populated as they should be,” he explained.

At their peak during September and October, pumpkins are a big business in the commonwealth. The 2020 U.S. Department of Agriculture Economic Research Service reports pumpkins account for a whopping $17.5 million in cash receipts—ranking 18th among the state’s top agricultural commodities.

According to a survey by the U.S. Department of Agriculture’s National Agricultural Statistics Service, 5,400 acres of pumpkins were harvested in 2020, down slightly from 5,600 acres in 2019.

“It’s been a good year,” said Harvie, an Amelia County Farm Bureau member. “The rain came at the right time, and it looks like we’ve got a good stand of pumpkins this year.”

He said this is the fifth year his farm has had a U-pick patch. He also operates a corn maze and offers hay rides and other fun activities for families.