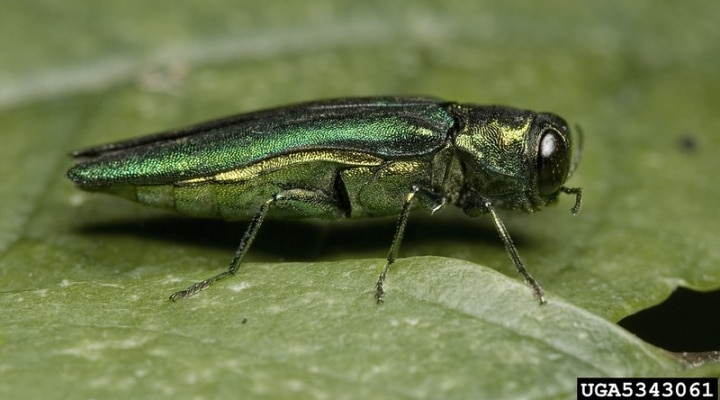 EAB, first detected in Michigan in 2002, has spread across 35 states through wood products, including firewood and trees sold for planting. (Public Domain; Photo courtesy of Dan West - CO State Forest Service via City of Boulder, Flickr)

AUGUSTA, Maine — The Maine Department of Agriculture, Conservation and Forestry (DACF) seeks the public’s help in locating ash trees sold at Lowe’s stores in Maine during spring and summer 2020. DACF Horticulture and Forest Health officials are concerned that the trees may contain emerald ash borer (EAB), an invasive insect that kills ash trees. The trees originated at a nursery located in an EAB infested and quarantined area. Customers purchased thirty-six of these trees during spring and summer from Lowe’s stores in Auburn, Augusta, Bangor, Brewer, Brunswick, Portland, Sanford, Scarborough, Thomaston, and Windham. The trees were potted, sold for $29.98, and labeled as Ash Green, Fraxinus pennsylvanica. (A tree tag sample follows this news release.)

Customers who have not already been contacted by Lowe’s are asked to get in touch with Maine State Horticulture Program, by emailing bugwatch@maine.gov or calling directly at 207-287-7545

DACF suggests that everyone refrain from planting any ash tree (Fraxinus spp., not mountain-ash) and the white fringe tree (Chionanthus sp.). EAB is established in Maine, and EAB infestations surround the state in Vermont, New Hampshire, New Brunswick, and Quebec. Ornamental ash trees in areas with EAB infestation require regular application of insecticides to survive and thrive. Visit https://www.maine.gov/eab for more information about emerald ash borer.

DACF extends its gratitude to Lowe’s and Clinton Nurseries for their response to this ash tree incident. DACF and Lowes staff worked collaboratively to address the situation, inform customers who purchased ash trees, and hang informational signage at Lowe’s stores throughout Maine.

About EAB in Maine
EAB, first detected in Michigan in 2002, has spread across 35 states through wood products, including firewood and trees sold for planting. In Maine, EAB currently infests a small percentage of our ash trees. Current EAB quarantine areas in Maine include all of York and Cumberland Counties, parts of Oxford County, and the northeastern corner of Aroostook County. The quarantine boundaries were drawn to form a buffer on those towns where EAB had been detected. EAB was found in northern Aroostook County in May 2018, western York County in September 2018, and Cumberland County in September 2019. DACF remains committed to delaying this pest’s impacts in uninfested areas through education, survey, quarantine, and biological control efforts.

Dakota Gardener: Still on the lookout for Emerald Ash Borer
May 10, 2021