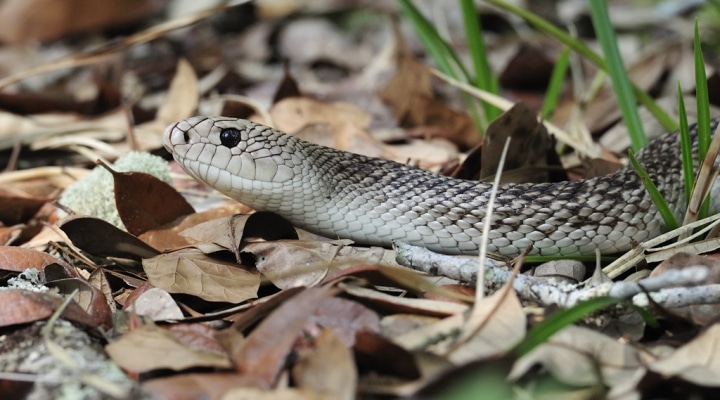 If you’ve seen a pine snake slithering around your property, the Virginia Tech Department of Fish and Wildlife Conservation wants to know. (photo by Bill Chitty, creative commons/flickr.com)

BLACKSBURG, Va. — If you’ve seen a pine snake slithering around your property, the Virginia Tech Department of Fish and Wildlife Conservation wants to know.

The nonvenomous snake was last seen in Virginia more than 30 years ago, and researchers want to get an idea of how many are currently in the state for management and conservation.

According to a press release from Virginia Tech, northern pine snake populations currently inhabit New Jersey, Tennessee and the Carolinas, while southern populations are in Florida and Georgia and coastal regions of Alabama and Mississippi. Researchers think there may be some in Virginia, as there are several areas that would provide ideal habitats for them.

They prefer places with sandy, well-drained soils or rock ridges, and they spend most of their lives just below the ground.

“One of the challenges when you have an animal that’s so secretive, sometimes its rarity is actually a product of the fact that it’s very hard to see and observe,” explained Dr. Kevin Hamed, an assistant professor of wildlife conservation and collection curation at Virginia Tech. “The numbers aren’t very abundant, and where they’re living in that underground environment, people aren’t around to see them when they’re active.”

He explained that pine snakes are valuable to the ecosystem because they eat small mammals—particularly ones that burrow underground and disrupt crops, gardens and lawns, such as moles.

“The pine snake is helpful in keeping those populations in check,” Hamed said.

Virginia Tech is collaborating with the Virginia Department of Wildlife Resources and the U.S. Forest Service to collect data on the snake. According to the DWR, pine snakes have previously been spotted in Augusta, Bath, Botetourt and Craig counties—but their range could be much wider, expanding into the Shenandoah and Giles areas. Observations typically are reported from April to October in other states.

Hamed emphasized that despite having a loud, intimidating hiss when cornered or frightened, pine snakes are harmless—they’re more frightened of people. However, as with any wild animal, people should not attempt to catch them.

“Just take a picture with your phone,” he advised. “In case you misidentify one, we don’t want anyone to possibly be bitten.”

Pine snakes average about 50 inches long, and their patterns typically have black blotches on a white background or brown blotches on a tan or yellow background. They’re easily confused with two other nonvenomous snakes in Virginia—the eastern hog-nosed snake and the eastern rat snake.

To report pine snake sightings, contact Hamed at 540-231-1887 or khamed@vt.edu. To learn more about the pine snake project, visit pinesnake.fishwild.vt.edu.