Home / Pennsylvania / PSU Flower Trials is a labor of love for organizers
A new user experience is coming! We'll be asking you to login to your Morning Ag Clips account March 1st to access these new features.
We can't wait to share them with you! Read more here. 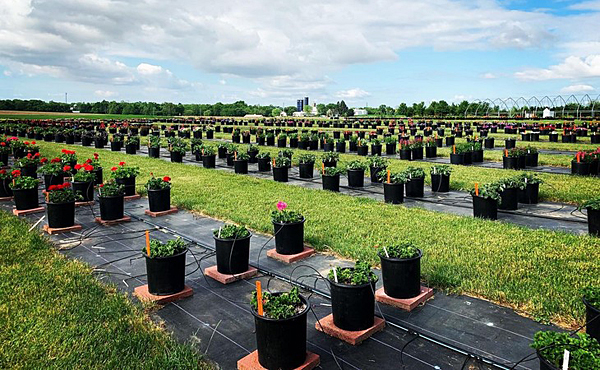 One of the oldest and largest flower trials in the world — the annual Penn State Flower Trials — is under way. (Penn State University)

UNIVERSITY PARK, Pa. — Each May, Sinclair Adam, Alyssa Collins, and a pack of faithful staff and volunteers at Penn State’s Southeast Agricultural Research and Extension Center pull off a logistical — and exhausting — feat, all for the love of flowers.

Over the span of a few days, the group transplants 15,000 seedlings into containers or beds, grouping each by genus and variety, and then moving them to an assigned location at the center. As one might surmise, that can be challenging, especially when weather conditions and other unforeseen circumstances come into play.

But those are the trials and tribulations, so to speak, that come with choreographing one of the largest and oldest flower trials in the world — the annual Penn State Flower Trials. Peeling back the program’s petals, one will find additional, year-round responsibilities, including cataloging, tilling, mulching, weeding, irrigating, fertilizing, cleaning, observing, measuring, note-taking and marketing.

“You would think that after many years, it would get easier, but as our program grows in reputation and scope, so does the interest from the public and commercial sector, leading to more entries,” said Adam, a Penn State Extension educator who supervises the trials for the College of Agricultural Sciences under the guidance of a 42-member floricultural advisory board.

“As much work as it can be, we come together to make it happen, and we take great pride in bringing these living laboratories and garden classrooms for horticulture, plant pathology and entomology to life. It’s a spectacular display and a labor of love for all involved.”

He explained that the purpose of the Penn State Flower Trials is to equip the floricultural industry and its consumers with valuable information on flower varieties that perform well — or not so well — in various environments around the state, so that those companies can offer the most favorable ones.

And it’s an industry that’s blooming. According to the recently released U.S. Department of Agriculture Floriculture Crops Report, the 2018 wholesale value of floriculture crops in the country is up 6 percent from the 2015 valuation. The total crop value at wholesale for all growers with $10,000 or more in sales is estimated at $4.63 billion for 2018, compared with $4.37 billion for 2015. Five states — California, Florida, Michigan, New Jersey and Pennsylvania — are responsible for $3.04 billion of that total value.

Penn State’s southeast research site, located in Manheim, Lancaster County, is the nerve center of the flower trials, where Collins, director of the center and associate professor of plant pathology, oversees the intake and preparation of submissions. They represent 970 varieties of flowers, with a few vegetables thrown in for good measure, from floriculture companies in the U.S. and Europe.

In addition to consumer favorites such as dahlias, petunias, marigolds, zinnias and the like, each year organizers accept between 250 and 300 new samples. This year, Adam is especially pleased to have entries in the impatiens category after a few years’ absence. The bright annuals were once the top bedding plants in the U.S., he noted, but they fell out of favor after becoming susceptible to downy mildew disease.

“Since 2017, we hadn’t seen any conventional impatiens, but now they are back and we are excited about it,” Adam said. “These new varieties have been bred for disease resistance, so if they do well, that will be good news for consumers.”

In addition to the Manheim location, samples are evaluated at collaborative sites at Hershey Gardens in Dauphin County; North Park in Allegheny County; and Penn State’s Russell E. Larson Agricultural Research Center at Rock Springs in Centre County. Adam said he would like to add more satellite trial sites, especially in the Philadelphia region.

Data collection takes place over the summer, when the flower samples are evaluated by Penn State horticulture experts and rated on a scale from one to five on factors such as flower quality, overall growth and uniformity under the challenging conditions of the Northeast and mid-Atlantic regions: hot, humid, with periods of nonstop rain, drought, wind, hail, tornadoes and hurricanes. Each rating represents an investment of about 30 hours. In early September, the results are tallied and shared online.

An undertaking of this size requires a legion of allies, and Adam and Collins said they are fortunate to have support from Penn State staff and Penn State Extension Master Gardeners, a trained volunteer troop that supports sustainable horticulture and environmental stewardship across the state. Jane Watts, who joined the Master Gardener ranks when she retired several years ago, is among those in the flower-trial trenches.

“I like getting my hands in the soil and being around the people involved,” she said. “It’s a lot of hard work, but it’s also gratifying to be part of a project that brings so much beauty and joy to others. And it’s exciting to watch the flowers grow and see how they do.”

In addition to the Master Gardeners, the team has salespeople, growers, flower breeders and other professionals who work side-by-side to advance the trials.

“We are grateful for everyone who touches this effort because without them, we would not be able to provide this invaluable service, one that has a positive impact on the industry, consumers and the environment,” Collins said.

Flower trial sites are open to the public. Combined locations of the Penn State Flower Trials attract more than 400,000 visitors annually, per Adam’s calculations. The hub in Manheim is open every day from dawn until dusk in June, July and August. The public also is invited to the “Summer Garden Experience” on July 27 at the center.

More information is available at https://agsci.psu.edu/flower-trials.

Evening in the Garden set for June 19