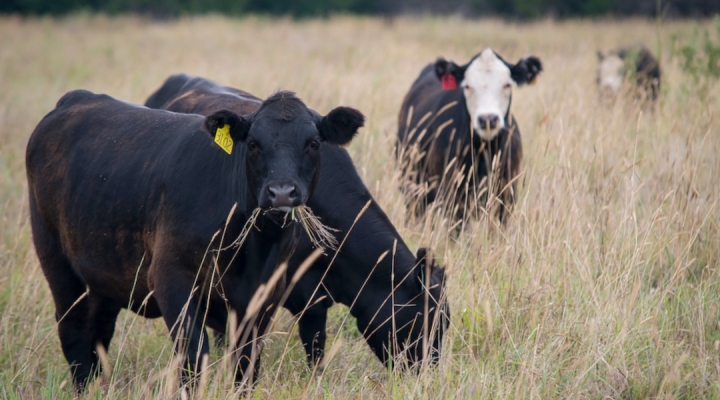 If livestock eat Johnsongrass with a fatal amount of prussic acid toxicity, their blood becomes filled with oxygen that cannot be absorbed by cells. Toxicity levels are highest after drought and frost. (Photo by Todd Johnson, OSU Agricultural Communications Services)

STILLWATER, Okla. – Ranchers turning cattle onto pastures with new forage growth this season should watch out for prussic acid toxicity, a condition fatal to livestock and commonly linked to consumption of Johnsongrass.

“One of our producers found a calf and cow dead on a small patch of Johnsongrass,” said Dana Bay, Oklahoma State University Extension agriculture educator in Ellis County. “We’ve gotten a lot of calls about testing, and several grass samples have tested positive, resulting in ranchers not moving cattle to new pastures.”

Barry Whitworth, DVM, OSU Extension southeast district area food and animal quality health specialist, said when temperatures rise and the ground dries out, certain plants in the sorghum family become toxic and can kill cattle at a rapid rate. Johnsongrass is one of Oklahoma’s most invasive plants.

When cattle ingest the plants high in hydrocyanic glycoside and break them down by chewing, prussic acid is released in the rumen and absorbed into the blood stream. Whitworth explained that once prussic acid reaches the circulatory system, the toxin prevents cells in the body from taking up oxygen. The blood becomes saturated with oxygen that cannot be absorbed by cells, and cattle perish from asphyxiation within minutes. Rosslyn Biggs, DVM, OSU Extension beef cattle specialist, explains what happens in more detail in this video from SUNUP, OSU Agriculture’s television show.

Producers should note prussic acid levels are highest in the leaves of young plants, and the upper leaves contain the most toxin. Stress from drought or frost increases prussic acid as well as fertilizing with large amounts of nitrogen and nitrogen/phosphorus soil imbalances.

While Johnson grass is high in prussic acid, the toxicity of other sorghum plants such as Foxtail millet is low. Ranchers should first identify the toxicity level of any sorghum variety intended for grazing purposes. Forage samples can be submitted to any OSU Extension county office for testing at OSU’s Soil, Water and Forage Analytical Laboratory in Stillwater.

Once a sample of grass is collected, producers should immediately take it to the local Extension office for testing. Bay said a county Extension educator can also meet the rancher on site and perform a test at the field. When moving cattle from one pasture to another along a road, she also advised to take caution with the Johnsongrass that often grows in roadside ditches.

When an animal displays signs of prussic acid toxicity, the producer should immediately remove all animals that appear to be normal to a new pasture and contact their veterinarian. Sick animals can recover if treated quickly with sodium nitrite and sodium thiosulfate to reverse the toxicity.