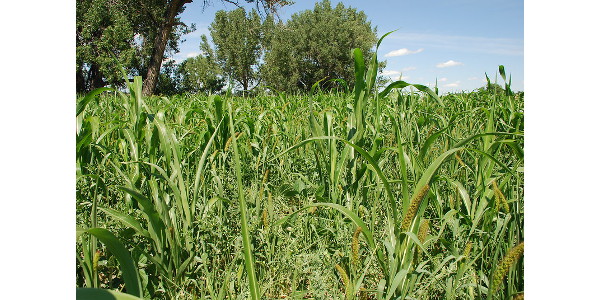 NORTH PLATTE, Neb. — With a warmer than usual fall so far, we’ve been able to graze later in the year with few concerns. However, cold temperatures are not far off and with our first freezes of the year comes the risk of prussic acid in sorghum species.

When temperatures drop, freeze damaged members of the sorghum family, including sudangrass, sorghum-sudan hybrids, forage sorghum, or grain sorghum (milo) releases a toxic cyanide compound we know as prussic acid. Plants like pearl and foxtail millet that are not of the sorghum family don’t carry this risk. If digested, prussic acid interferes with the blood’s ability to transport oxygen, often resulting in death.

While deadly, prussic acid doesn’t stick around for long. After 5-7 days, the toxin has dissipated enough that forages are once again safe to graze. However, this doesn’t mean the danger is over. Every time a new part of the plant receives damage from a frost, our timer must again be reset. This continues until the entire plant has been killed by frost.

So how do we stay safe? Pull animals from sorghum before a frost and keep them off for the 5-7 days. Prussic acid also accumulates in new growth, so keep an eye out for new shoots and consider pulling animals until they reach 15-18 inches in height, or the plant dies.

Since prussic acid dissipates from dead tissues, haying sorghums won’t be a concern, as long as moisture content is low enough. If harvesting for silage is an option, the proper ensiling will reduce prussic acid to safe levels.

Prussic acid is a real risk, but one easily dealt with by proper management. Don’t graze sorghums 5-7 days after each frost until the entire plant is killed, and keep an eye out for equally dangerous new shoots. If this prevents grazing from being an option, consider haying or silage as safe solutions.