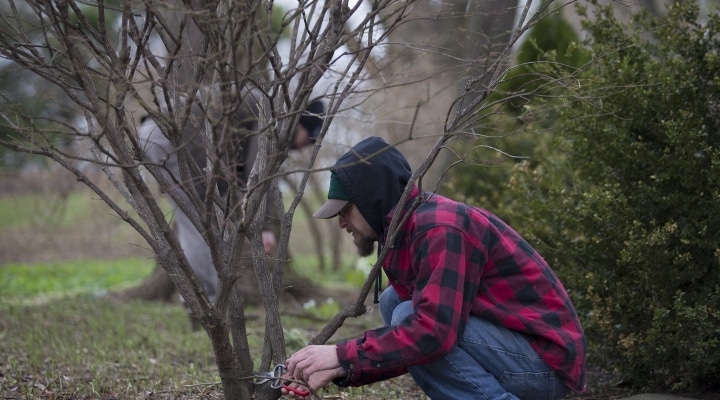 To prune or not to prune, that is the question. Pruning is an important part of maintaining plant health and maximizing plant productivity. This is often a topic that brings fear and confusion, but pruning is, in fact, a beneficial and routine task. (photo by COD Newsroom, Creative Commons/flickr.com)

JONESBORO, Ga. — To prune or not to prune, that is the question. Pruning is an important part of maintaining plant health and maximizing plant productivity. This is often a topic that brings fear and confusion, but pruning is, in fact, a beneficial and routine task.

Ornamental plants in the home landscape are pruned for several reasons, including maintaining a desired size or shape; promoting healthy, vigorous growth, flowering or fruiting; and removing sections damaged by insects, disease or weather. Each plant in the landscape has its own growth habit and different requirements for pruning. Some shrubs have dwarf growth habits and may never require pruning, while vigorous, large-growing shrubs may require frequent pruning. Anyone can prune, but not everyone prunes properly.

Improper pruning, or pruning at the wrong time of the year, can result in misshapen plants, reduced flowering or plants that are more likely to be damaged by insects, diseases or winter cold. Because flowering ornamentals form their flower buds at different times of year, pruning times must be adjusted accordingly.

Many spring-flowering plants such as azalea, dogwood, forsythia, redbud and rhododendron set flower buds in the fall, so pruning during the fall or winter months eliminates or decreases their spring flower display.

Plants that typically flower during the summer form flower buds on new growth and can be pruned during the winter with no effect on their flowering. However, sometimes plants may need to be pruned outside of these ideal windows to remove damaged or dead plant parts, to remove obstructions from windows or buildings, or to help stop the spread of diseases.

As a general rule, plants that flower before May should be pruned after they bloom, while those that flower after May are considered summer-flowering and can be pruned just prior to spring growth.

One exception to this rule is the oakleaf hydrangea, a summer-flowering shrub that forms flower buds the previous season.

Another exception is late-flowering azalea cultivars, which bloom during May, June or July. Prune both the oakleaf hydrangea and late-flowering azalea cultivars after they bloom. Newer azalea varieties like the ‘Encore’ line, which bloom in the spring, summer and fall, don’t require much pruning — if any at all — as long as they are planted in the right place. At most, you may need to prune taller shoots back into the body of the plant immediately after spring flowering. ‘Knock Out’ roses start flowering in spring up until frost, but should be pruned back to about 12 inches to the ground in early spring, after the threat of last frost has passed, to help stimulate vigorous growth throughout the season.

Other types of plants, like broadleaf evergreen shrubs, generally require little or no pruning at all because they usually develop a naturally symmetric growth habit when left alone, but late winter when they are dormant is usually a good time if pruning is desired.

Pruning is only harmful to a plant if done incorrectly or at the wrong time. With the right information and confidence, pruning should become a normal part of your landscape maintenance routine.

To learn more about pruning ornamental plants, see University of Georgia Cooperative Extension Bulletin 961, “Pruning Ornamental Plants In The Landscape,” and Bulletin 949, “Basic Principles of Pruning Woody Plants,” which can be found at extension.uga.edu/publications.