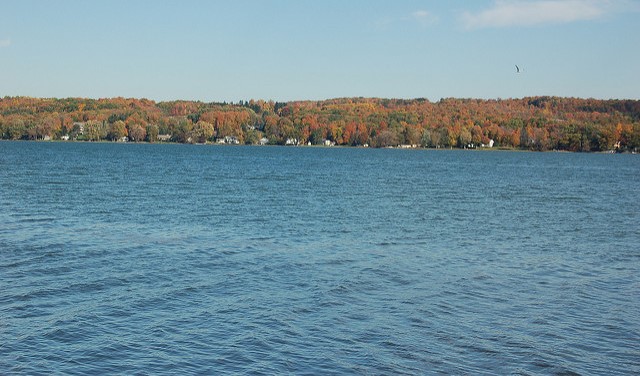 Chautauqua Lake is an important recreation and tourism destination for boating and fishing. The lake is approximately 13,000 acres in size and is fed by an approximately 100,000-acre watershed with 14 major tributaries. (GeordieMac Pics, Flickr/Creative Commons)

ALBANY — U.S. Senate Minority Leader Charles E. Schumer and U.S. Senator Kirsten Gillibrand, a member of the Senate Environment and Public Works (EPW) Committee, today announced that, following their push, an authorization for the Chautauqua Lake Feasibility Study was included in the 2018 Water Resource Development Act (WRDA), which has passed both the Senate and the House and heads to the President’s desk for final signature. Chautauqua Lake currently suffers from continued environmental and economic damage caused by repeated algal blooms, and this study authorization would allow the U.S. Army Corps of Engineers (USACE) to evaluate the excessive phosphorous runoff that causes these algal blooms. Additionally, the USACE would be able to study flood risk management measures, assess ecosystem restoration efforts, and address the accelerated erosion along the lake’s tributary streambanks. Erosion along Chautauqua Lake’s tributary streambanks has resulted in excessive sediment deposition, which also impairs the lake’s water quality.

“Chautauqua Lake is a jewel of Western New York and a vital source of recreation and economic activity for both residents and countless visitors alike, but it is threatened by algal blooms that we must do more to reverse and prevent,” said Senator Schumer. “This is why I am so proud we secured the Chautauqua Lake Feasibility Study in the bipartisan WRDA bill to allow Army Corps of Engineers to carefully examine the destructive, repeated algal blooms in Chautauqua Lake that have diminished water quality. This is a crucial and necessary step in the right direction and I promise to fight tooth and nail to ensure that this study is fully funded by the Army Corps of Engineers.”

“I am very pleased that this vitally important legislation to help protect Chautauqua Lake has now passed the Congress and will soon be signed into law,” said Senator Gillibrand, a member of the Senate Environment and Public Works Committee. “Chautauqua Lake is one of our state’s great natural treasures, and Congress has a responsibility to help stop the algal blooms that have been plaguing the lake’s water quality and harming our local economy. I was proud to fight to include this Feasibility Study in this bill, and I will continue doing everything I can to help make sure New York’s waterways are safe and clean.”

Chautauqua Lake is an important recreation and tourism destination for boating and fishing. The lake is approximately 13,000 acres in size and is fed by an approximately 100,000-acre watershed with 14 major tributaries. About 34 percent of the lake’s watershed drains from agricultural and developed lands. Excessive nutrients like phosphorous damage the ecological state of the watershed, threatening water quality.

The Chautauqua Lake Feasibility Study would enable the local communities to better understand changing flood risks and provide tools to help guard against future environmental degradation and property damage. The study would inform best practices concerning excessive weed and algae growth, as well as mitigation for sediments deposited at the mouths of the tributaries, to further minimize flood risks harming the environmental health and economic viability of Chautauqua Lake.

Haul cattle? This program is for you!