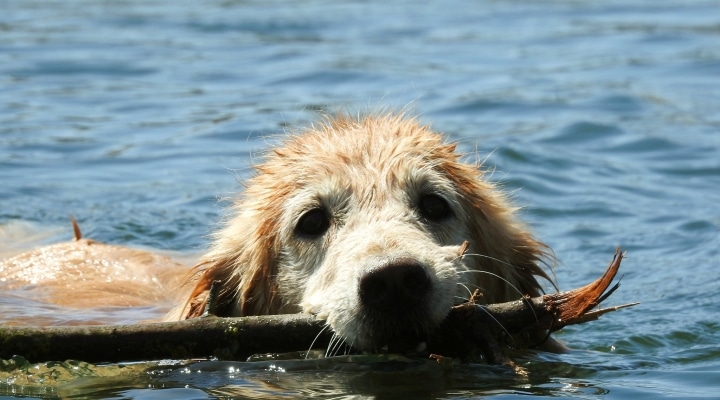 Keeping dogs and other animals safe from toxic algae blooms in water is the focus of a free Penn State Extension webinar slated for 7 p.m. July 23. (photo by Eric Sonstroem, Creative Commons/flickr.com)

UNIVERSITY PARK, Pa. — Keeping dogs and other animals safe from toxic algae blooms in water is the focus of a free Penn State Extension webinar slated for 7 p.m. July 23.

Harmful algae blooms, called HABs, are the overgrowth of cyanobacteria, or blue-green algae. They can cause water quality problems in lakes and ponds, including the occasional production of potent toxins, said Bryan Swistock, senior water resources extension associate.

He explained that these microscopic algae “bloom” during hot and dry weather in July, August and September. They grow in response to high levels of phosphorus and nitrogen in ponds and lakes, which originate from fertilizers, manures, septic systems and stormwater runoff.

“These toxins can poison people, household pets, waterfowl and livestock,” Swistock said. “Because HABs are increasing in many areas, the number of dog poisonings from cyanobacterial toxins is on the rise. Dogs are more susceptible because they are likely to ingest water during swimming and lick toxins from their fur.”

Toxic algae blooms can be identified by appearance, Swistock noted. “They usually create a stagnant scum layer that often looks like spilled paint or pea soup,” he said. “The scum layer can be shades of green, blue, gray, red, brown or white and can have floating foam. A few species can create floating mats that look like grass clippings or jelly-like blobs.”

Excessive growth of blue-green algae or any other type of algae can be prevented by reducing the levels of nutrients such as phosphorus and nitrogen in the pond or lake water. “Without these nutrients, the algae can be present, but they are unable to bloom to levels capable of producing dangerous toxin concentrations,” Swistock said.

Chemical additives and aeration devices can be used to reduce nutrient levels in ponds and lakes. Algaecides can be used to kill blue-green algae when they first appear and before they are able to produce toxins.

Webinar participants also will learn how to protect animals before and after they are exposed to pond and lake water. “The best method to ensure your dog’s safety is to not allow them in any pond or lake that has or has had recent symptoms of an apparent HAB,” Swistock said. “The toxins produced can linger in the water for weeks even after the bloom of algae is gone.”

However, if a dog enters the water, owners should waste no time in rinsing it off with a clean source of water and making sure that the dog does not lick its fur. If no other source of water is available, a towel can be used to dry the dog until it can be rinsed.

Swistock said the signs of exposure to an algae toxin can occur within minutes and up to a few hours. The most common symptoms include vomiting, diarrhea, yellowing of eyes, stumbling, seizures, drooling, rashes and lethargy.

“Seek immediate veterinary care if you notice any unusual health symptoms after your dog has been swimming in a pond or lake that might have harmful algae blooms,” Swistock said.

The webinar is free, but preregistration is required. To register, visit https://extension.psu.edu/protecting-dogs-and-animals-from-harmful-algae-blooms.

Penn State Extension also has a short video on HABs that can be viewed at https://extension.psu.edu/harmful-algae-blooms-habs.