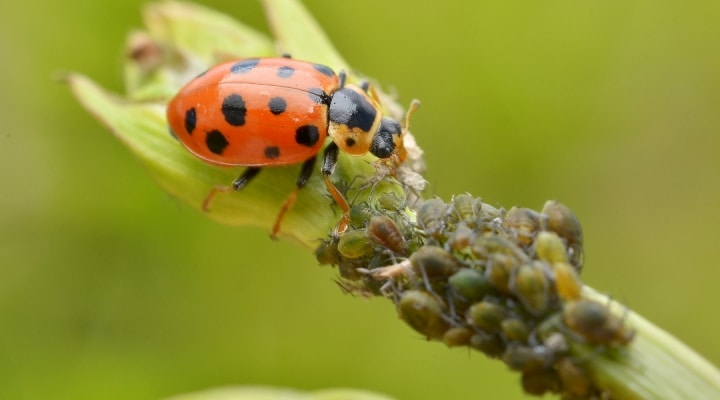 Aphids are a highly destructive pest to an array of crops, and their large numbers, ability to transmit plant pathogens and increased resistance to insecticides make them a persistent problem for growers. They also happen to be a favorite food of the ladybug, which gardeners welcome as a source of sustainable pest management. (Gilles San Martin, Flickr/Creative Commons)

ATLANTA — For home gardeners and farmers, herbivorous insects present a major threat to their hard work and crop yields. The predator insects that feed on these bugs emit odors that pests can sense, which changes the pests’ behavior and even their physiology to avoid being eaten. With bugs becoming more resistant to traditional pesticides, researchers now report they have developed a way to bottle the “smell of fear” produced by predators to repel and disrupt destructive insects naturally without the need for harsh substances.

The researchers will present their results today at the fall meeting of the American Chemical Society (ACS). ACS Fall 2021 is a hybrid meeting being held virtually and in-person Aug. 22-26, and on-demand content will be available Aug. 30-Sept. 30. The meeting features more than 7,000 presentations on a wide range of science topics.

“It is not uncommon to use our senses to avoid risky situations. If a building was on fire, we as humans could use our senses of sight or smell to detect the threat,” says Sara Hermann, Ph.D., the project’s principal investigator. “There is evidence for such behavioral responses to risk across taxa that suggest prey organisms can detect predation threats, but the mechanisms for detection aren’t very well understood, especially with insects.”

“Insects rely on olfactory cues to find food, mates and places to live, so this is a great opportunity to investigate how to use these smells to manipulate their behavior,” says Jessica Kansman, Ph.D., a postdoc who is presenting the work at the meeting. Hermann and Kansman are at the Pennsylvania State University.

Aphids are a highly destructive pest to an array of crops, and their large numbers, ability to transmit plant pathogens and increased resistance to insecticides make them a persistent problem for growers. They also happen to be a favorite food of the ladybug, which gardeners welcome as a source of sustainable pest management. Hermann’s research has shown that aphids and other herbivorous insects will steer clear of fields and gardens if they can smell predators nearby. Not only that, but exposure to the odor cues given off by ladybugs can also cause aphids to slow their reproduction rates and increase their ability to grow wings, both of which are behaviors designed to avoid threats.

With these observations in mind, the research team set out to determine whether the olfactory cues given off by ladybugs could, by themselves, control pests. They started by identifying and extracting the volatile odor profile from live ladybugs using gas chromatography – mass spectrometry, which separates and allows for identification of the individual components of the ladybugs’ smell. To see which compounds the aphids would respond to, they hooked up the antennae of live aphids to an electroantennogram (EAG) machine and exposed them to each individual odor the predator emitted to see which compounds they detected. The strength of their reactions was measured based on the signal picked up by the EAG machine. Of the many compounds emitted by ladybugs, aphids had the strongest response to methoxypyrazines, such as isopropyl methoxypyrazine, isobutyl methoxypyrazine and sec-butyl methoxypyrazine. Once the compounds were identified, Hermann and team set out to create a special odor blend that can be used in an essential oil diffuser that will spread the scent over time across a garden or field.

Next, the team plans to conduct field tests of their scent diffusers to see if the effects on aphids and ladybugs are similar to what they observed in the lab. Hermann and Kansman also want to determine the dispersal area of the diffusers, and whether they could be applied to other pests and predators, as well as various types of crops. In addition, they are collaborating with a manufacturing company to design special diffusers for eventual commercial use by both farmers and gardeners.

A recorded media briefing on this topic will be posted Wednesday, Aug. 25 at 9 a.m. Eastern time at www.acs.org/acsfall2021briefings.