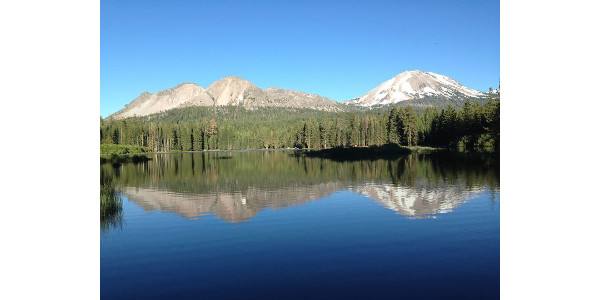 Protected lakes in the continental U.S. tend to occur in relatively remote, mountainous western states where freshwater biodiversity is low and there are relatively few lakes. In contrast, freshwater biodiversity is greatest in the southeastern U.S. where there are relatively few protected areas. Pictured here is Manzanita Lake (Lassen Volcanic National Park, California). (Photo by Ian McCullough)

EAST LANSING, Mich. — According to a recent study published by a team of scientists at Michigan State University and the University of California, Berkeley, the U.S. is currently not protecting enough lakes.

In 2010, the Convention on Biodiversity (CBD) declared the need to protect at least 17% of global fresh waters by 2020 to protect rapidly declining freshwater biodiversity and ecosystem services (e.g., drinking water quality).

Recent global estimates have shown that about 15-21% of fresh waters are protected, which is near the CBD target. An important caveat is that the CBD did not define what it means for a waterbody to be considered “protected.”

Scientists and management agencies are asking several questions. Does it need to occur within a protected area, such as a national park, wilderness area or national forest, or does its catchment, the area of land that drains it, also need to be protected? Answering this question is essential for determining if the U.S. and other countries are meeting the CBD target.

The MSU-led science team counted how many lakes in the continental U.S. are protected based on whether they occur within protected areas or whether they have highly protected catchments.

They found that 17.8% of lakes currently fall within protected areas, just above the CBD target. However, just 7.5% of lakes have greater than 80% of their catchments in strictly protected reserves such as national parks and wilderness areas, indicating that the U.S. actually might be falling short of the CBD target.

“This is an example of the need to clarify what a protected waterbody actually is,” said lead author Ian McCullough, a postdoctoral researcher in the MSU Department of Fisheries and Wildlife. “How can we know if we are meeting a target if we don’t actually know what the target means?”

Michigan has 4.2% of U.S. lakes. About 22.6% of Michigan lakes fall within protected areas, whereas approximately 15.7% of Michigan lakes have greater than 80% of their catchments protected. These numbers place Michigan ahead of the nation as a whole based on both of these definitions of lake protection.

Of all states, Idaho has the highest percentage of its lakes protected (approximately 68.3% in protected areas and 60.8% with greater than 80% protection), but Idaho has just 0.7% of U.S. lakes, which amounts to nearly 10,000 fewer lakes than Michigan.

Not only is the U.S. potentially not protecting enough lakes, but the MSU-led team also found that the lakes being protected do not represent the diverse characteristics of U.S. lakes. The CBD specifies the need to protect an “ecologically representative” set of lakes. The study found that protected lakes occur disproportionately in the mountainous western U.S. This region contains relatively few lakes (6.5% of continental U.S. lakes) and relatively low freshwater biodiversity.

“This is not something entirely surprising”, McCullough noted. “We have a history of protecting relatively remote, unproductive landscapes, particularly mountain ranges. It was always easier to set up protected areas in the west where there was more available land and fewer people. The result is that protected areas tend not to house the most biologically diverse systems, both on land and in water.”

McCullough added: “The key is identifying types of lakes that should be prioritized for protection. Freshwater and terrestrial biodiversity generally coincide, so we can potentially bolster protection where both are high, such as in the Southeast. Maybe we can’t designate many new national parks, especially large ones, but restricting human activities near shorelines or prioritizing headwaters, which are upstream of everything else, could be effective and realistic options”.

The open-access publication from the journal Limnology and Oceanography Letters can be freely downloaded here.

Precision farming comes into its own

Why do farmers care about conservation?
March 23, 2020