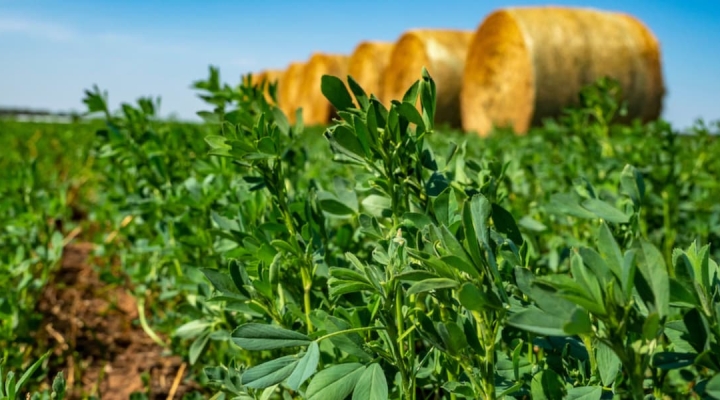 In the peak of summer, blister beetles can lurk in alfalfa hay that is baled and fed to horses. (Photo by Todd Johnson, OSU Agricultural Communications Services)

STILLWATER, Okla. — Oklahoma producers, especially those in the northeastern part of the state, should watch out for blister beetles in their alfalfa this summer. If a horse eats a blister beetle when snacking on alfalfa hay, the consequences can be deadly.

“The one we really need to worry about is the striped blister beetle,” said Kelly Seuhs, Oklahoma State University Extension alfalfa specialist. “They have the highest concentration of cantharidin, which is a blistering agent produced by the beetle as a defense mechanism.”

If a horse consumes blister beetles in high enough quantities, it may exhibit the following symptoms:

Seuhs said ruminant livestock, such as cattle and goats, can also be affected by blister beetles but generally not as severely as horses.

Scouting alfalfa along field borders for beetles before the hay is baled can save a horse’s life. Seuhs said the insects are notorious for swarming and are known to congregate. They’re most active in the summer, and when a swarm is present, the ground will appear to move.

“We’ve received reports of hay meadows and grass pastures that are infested, even areas around barns where people keep livestock,” he said. “They’re attracted to the flowering structures of certain weeds, so if you can control the weeds, the better the chance of reducing beetles in your area.”

Hay most often becomes contaminated with blister beetles when the insects are crushed in alfalfa from the swather. Beetles are killed by the crimper rollers and become trapped in the hay. The remains of blister beetles may be concentrated in a small portion of the hay from a field. Beetles are also killed and trapped when forage is driven on before the beetles have had time to escape.

If left alone, the vast majority of blister beetles leave alfalfa shortly after cutting. Cutting without using crimpers and avoiding wheel traffic on freshly cut alfalfa are two of the best ways to avoid problems.

Seuhs said treating fields for grasshoppers as early as possible in the spring can help reduce beetle numbers. Blister beetles feed on grasshopper eggs laid in the cracks and crevices of the ground as a nutrient source for the winter. The size of a grasshopper population can be a sign of next season’s blister beetle infestation.

While there is no way to completely eliminate the possibility of blister beetles in alfalfa, the best approach to management is to take all possible precautions to reduce the likelihood that they are present. Learn how to safely purchase alfalfa hay that is free and clear of blister beetles and more about beetle infestations in the OSU fact sheet.