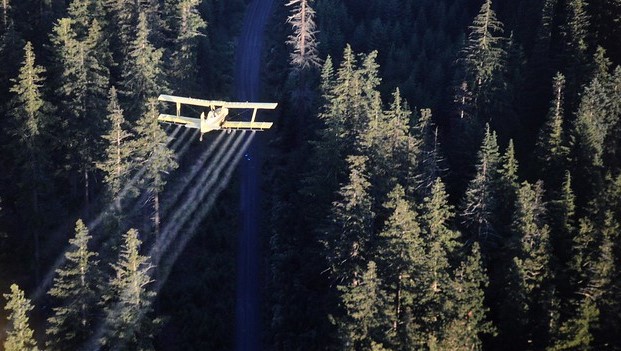 Members of the timber industry say it would take a useful tool away from them in managing the state's working forests. (Stock photo via R6, State & Private Forestry, Forest Health Protection, Flickr/Public Domain; Photo by and courtesy of: William M. Ciesla)

AUGUSTA (AP) — A committee of the Maine Legislature is slated to resume a debate over a proposal to prohibit aerial spraying of herbicides in the state’s forests.

The proposal has faced opposition from the Maine timber industry. Members of the industry say it would take a useful tool away from them in managing the state’s working forests. The Committee on Agriculture, Conservation and Forestry is going to revisit the issue on Thursday.

The committee held a lengthy session on the proposal last week and did not reach a vote. A vote in favor of the proposal would give it a greater chance to pass the full Maine Legislature. Some northern Maine residents support that idea, but timber representatives say the spraying helps control vegetation for companies that harvest trees.