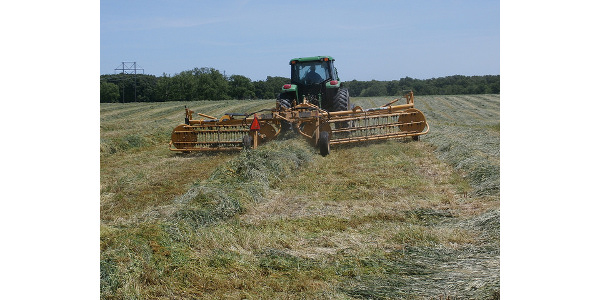 Many factors influence how bales make the trip from the field to the cow, says Jim Humphrey, a University of Missouri agronomist and member of the NRCS+MU Grasslands Project. (MUExtension417 via Flickr)

COLUMBIA, Mo. — There are two ways to more hay: Grow more or store it better.

Many factors influence how bales make the trip from the field to the cow, says Jim Humphrey, a University of Missouri agronomist and member of the NRCS+MU Grasslands Project.

Environmental factors such as sunlight, precipitation, evaporation and ground conditions can affect quality.

The size of the bale itself affects how much hay is wasted, says Humphrey. Larger-diameter bales have less loss. Smaller bales have about twice as much exposed surface for the same amount of hay.

Ideally, hay bales should be stored in a covered, protected area. Most are not. Producers can still reduce waste by changing a few things when storing bales outside:

Stack bales end-to-end. Open-faced bales receive damage from sunlight and precipitation on the two exposed ends. The outer 6 inches on each side makes up 280 pounds or 20% of a 5 x 5.5-foot round bale weighing 1,400 pounds.

Do not overestimate bale density. It is easy to misjudge dry matter in bales, Humphrey says. He uses figures from Jason Banta’s work at Texas A&M AgriLife Extension Service as a guide but recommends that producers assume the bale weighs 10% less than the naked eye might guess.

Store bales properly. Put hay under a roof if you can. As spoilage occurs, bales flatten and squat closer to the ground. This increases the amount of surface exposed to moisture.

Store bales away from trees. Choose a sunny location with a breeze.

Store bales end-to-end on elevated ground that drains well. The round sides of the bale should not touch each other. Leave about 3 feet between rows of bales. This makes them easier to access with tractors and also makes it easier to do forage tests.

But not all rings are created equal. Studies show that open rings have 20% waste, compared to 5% for cone rings. To calculate hay ring waste, Ellis recommends the Noble Research Institute’s website. Search for “hay ring waste” at www.noble.org.

Large, round bales unrolled for feeding have about 43% waste. The advantage of unrolling bales is that aggressive cows can be spaced away from more timid ones, which results in less hoof damage from cows competing for space at the ring.

Feed hay in well-drained areas. Feed on dry, elevated surfaces or a pad to reduce waste.

Consider herd dynamics. Cull aggressive animals that take feed away from ones that are more timid. Have enough feeding rings to avoid crowding.

See also: “Bale Weight: How Important Is It?” at agrilifeextension.tamu.edu/library/ranching/bale-weight-how-important-is-it.