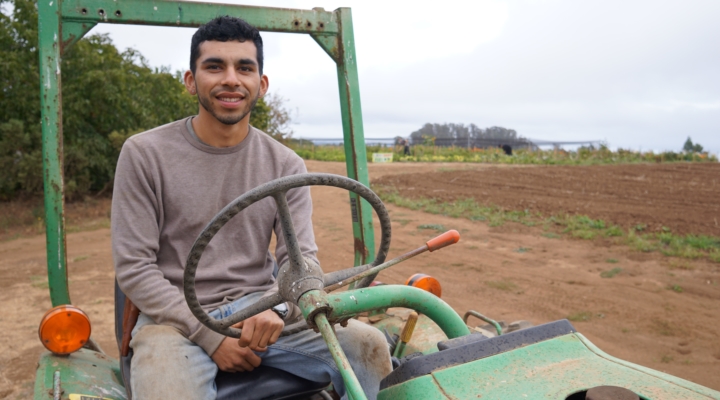 David Robles, a 2017 and 2018 recipient of CCOF’s Future Organic Farmer Grant Fund, takes a tractor for a spin at the U.C. Santa Cruz Center for Agroecology and Sustainable Food Systems. Robles is now farm manager for Food What?!, a youth empowerment/food justice nonprofit in Santa Cruz. (Courtesy Photo)

SANTA CRUZ, Calif. — Once a niche product, organic farming is the fastest-growing sector of the U.S. food industry. In fact, organic food today is a nearly $50 billion industry, employing 1.4 million people nationwide and more than 400,000 in California alone, according to the California Certified Organic Farmers Foundation (CCOF).

Driving that growth is rapidly growing consumer demand, noted Jessy Beckett Parr, the foundation’s director. She said four out of five American households today buy organic food each year, and the market is expected to grow because millennials make up 42% of organic consumers.

But despite the industry’s growth, farmers, processors and consumers still need to be educated about organic foods – how to grow and handle them, how to meet USDA certification and about the benefits of eating organic. Which is the mission of CCOF.

“Our organic training institute provides hands-on training and webinars for farmers, handlers and retailers to give them information they need to be successful in business, while our Future Organic Grant Fund provides scholarships and other financial support for organic education from kindergarten through college,” Parr said.

“With fewer young people going into agriculture, new organic farmers and entrepreneurs are needed, and we support teachers in grades K-8 who educate their students about organic agriculture, FFA students using organic production methods in their projects and scholarships for two-year and four-year college students.”

Because encouraging the next generation of farmers is so important, Farm Credit has strongly supported CCOF since 2015, said Byron Enix, President and Chief Executive Officer of American AgCredit.

“There’s a growing demand for organic foods that we expect will continue, so encouraging new organic farmers and training them to meet strict certification standards is extremely important,” Enix said. “CCOF is a leader in these efforts, and we are happy to support its work.”

Based in Santa Cruz, CCOF has been a leader in the organic movement since the beginning, Parr said. The organization started out in 1973 as the California Certified Organic Farmers and helped create the standards for California organic growers to follow. Other groups across the nation did the same, so to avoid inconsistent and confusing standards, the industry eventually petitioned USDA to develop a national certification system. After more than a decade of work, standards were adopted in 2002.

The Foundation today certifies more than 4,000 farmers and processors in 43 states, Canada and Mexico.

“Organic has a range of social, environmental, and economic benefits. It has a lighter touch on the environment, generally provides higher wages and stimulates economic activity in communities where organic businesses are located,” she said.

And CCOF would have a difficult time fulfilling its mission without the support of Farm Credit and other sponsors, she added.

“Farm Credit supports our educational work and grant-making programs to advance organic agriculture for a healthier world,” she said. “Our work would be severely curtailed without sponsors like Farm Credit.”