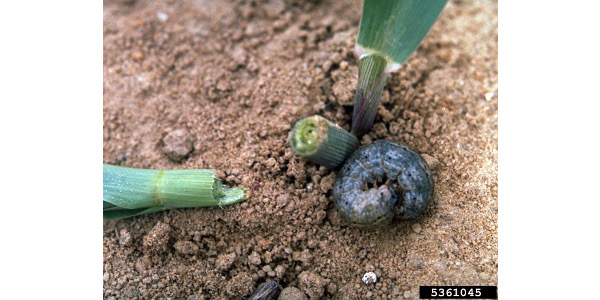 Farmers should be on the look out for black cut worm in their corn fields. (Courtesy of University of Illinois Extension)

URBANA, Ill. — Farmers should be on the look out for black cut worm in their corn fields. The earliest projected cutting date is this week in Montgomery County. University of Illinois Extension Entomologist Nick Seiter says fields especially at risk to having plants cut by the black cut worm include those with later planted corn and those sown into grassy weeds or a late terminated cover crop, “What you are going to want to do is to scout your field. Look for plants lying on the ground that appear to have been cut with scissors.”

This is different looking than damage from a bird digging up the plant looking for the seed. These corn plants will be cut off. When you start finding them, scrape around in the residue looking for the larvae. The black cut worm larva is dark colored, with a greasy appearance. It is not slimy, but it looks like it has been coated with Crisco. If you find the worms and about three percent of the plants have been cut throughout the field, then initiate a treatment.

Seiter says there are several pyrethroid insecticides that can be successfully used as a rescue treatment.

Kelly Estes at the Illinois Natural History Survey coordinates an insect trapping network throughout the state and those results, including the black cut worm cutting dates, are posted online at The Bulletin website – that’s bulletin.ipm.illinois.edu and on twitter using the handles @ILPestBulletin or @ILPestSurvey.