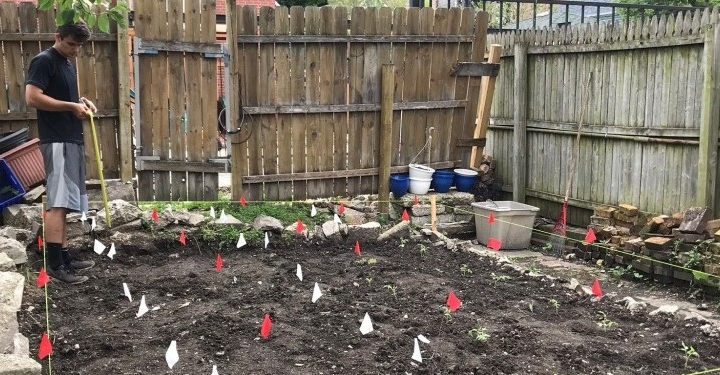 URBANA, Ill. – Chicago’s urban agriculture scene may be booming, but a hidden danger – lead – may lurk in the soil. The Chicago Safe Soils Initiative, a new project from the University of Illinois, offers free soil lead tests to home gardeners and urban farmers across the metropolitan region.

“There’s a lot of evidence that cities are hotspots of heavy metals like lead. We need to consider that aspect of urban farming,” says Andrew Margenot, project leader and assistant professor in the Department of Crop Sciences in the College of Agricultural, Consumer and Environmental Sciences (ACES) at U of I.

Margenot and partners from University of Illinois Extension – also in the College of ACES – and Chicago-based Advocates for Urban Agriculture (AUA) are looking to collect thousands of soil samples from backyards, community gardens, and larger-scale urban farms over the next two years. They will not only provide results and interpretation directly to growers, they’ll also use the data to create a map showing lead hotspots across the metropolitan region. The map, which will be publicly accessible, could help guide decisions about garden or farm placement and mitigation strategies.

“Many growers, at least on a production scale, just assume the land is contaminated and will take precautions for it. The extreme measures growers sometimes take, including paving land to build a farm, can have unintended consequences for stormwater runoff and flooding and might not be necessary,” says Laura Calvert, executive director of AUA. “Knowing the soil contamination levels and receiving technical assistance from soil scientists can let the growers know what mitigation practices are needed, both for safe growing and conservation efforts.”

Soil naturally contains lead at relatively low concentrations, measured in parts per million. The average Illinois soil sample contains 21 parts per million, which is not considered harmful. In Chicago, the average jumps to an estimated 198 ppm, though depending on the sampling location, it’s not uncommon to find measurements in the thousands.

“For soils, there are two or three main lead sources – leaded paint and leaded gasoline. Those are no longer in use, but once lead is put down, it doesn’t leach; it binds to soil organic matter and clay very strongly where it’s put down. Another source is industrial activity, like smelters,” Margenot says.

Because of the sources, it’s most common to find high lead levels near roads and adjacent to houses built before 1978, when leaded paint was banned. But it’s hard to predict where someone might have dumped a gas can or a can of paint 40 years ago. And because lead stays where it is deposited, there can be a lot of variation in the soil, even within a small space.

“Personally, if I had a backyard garden and I suspected there might be lead, I would grid-sample every foot. Knowing how much those levels can vary, it’s just not worth not knowing,” Margenot says. And because testing is free, there’s no reason not to do it. Ordinarily, soil lead tests can be cost-prohibitive, at $30 to $80 per test.

Collecting samples from Chicago growers is only part of the project. Margenot and a crew of U of I students have been doing their own sampling throughout the city at long-term testing sites, with more to come later this summer and next year. They are also looking at soil amendments and crop selection to reduce lead uptake by plants.

“We want to find out what’s the safest crop, the best form of amendment to add,” Margenot says. “All we have are rules of thumb for lead-contaminated soils, such as avoiding root crops and choosing fruiting plants. We have some data so far that supports that, but not enough from real-world situations and not enough data to know what to do with leafy plants. Kale, for example. What do you do with that?”

Instructions for soil sampling can be found on Margenot’s Chicago Safe Soils Initiative website. Samples can be mailed to Margenot’s laboratory in Urbana, dropped off at an Extension office in Cook County, or submitted at an upcoming urban agriculture event in Chicago. Growers can apply to be part of the network of longer-term testing sites on the project website, as well. For more detailed questions, contact Margenot at ChicagoSoils@gmail.com.

This project was funded through an interdisciplinary collaboration grant, a program offered by Illinois Extension. These grants fund partnerships between University of Illinois Extension personnel and faculty in the College of Agricultural, Consumer and Environmental Sciences for projects that will use campus-based research to enhance the quality of life of people in communities across Illinois. Project themes vary widely – from improving school nutrition programs to helping farmers manage nitrogen application – but all focus on research with practical applications for Illinois residents.

Confidence in the ag economy soars