Home » Project gets to the root of farmers’ problems 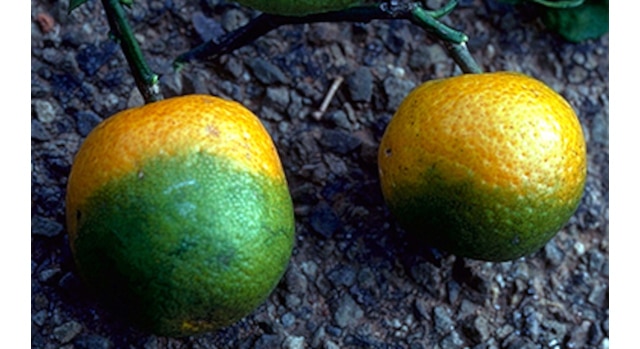 Citrus Greening Disease — also known as Huanglongbing, or HLB — results in fruit that is bitter and worthless. It has crippled Florida’s citrus industry and has already been detected in California, which grows 80% of America’s fresh citrus. An estimated 267,000 acres of Golden State oranges, lemons, grapefruits, and mandarins are at stake.

For these reasons, the National Institute of Food and Agriculture is supporting scientists at UCR, the University of Florida, and the U.S. Department of Agriculture’s Agricultural Research Service in their search for plants with natural tolerance to HLB.

“If you find a disease affecting your crops, a good first step is to look for plants that are able to grow and produce despite infection,” said UCR geneticist Danelle Seymour. “Then you can start to identify the genetic basis of the disease tolerance and make sure the next generation of plants includes these genes.”

Following this recipe, Seymour and UCR plant pathologist Philippe Rolshausen will examine a set of 350 citrus hybrids developed and grown by project collaborators in Florida. All trees in the set are already infected with HLB, yet they live longer, are healthier, and yield more fruit than their infected relatives.

While there are a number of projects searching for different solutions to the threat of HLB, this project is different because the plants being tested were all grown in an environment endemic to the disease. Additionally, the number of plants they’re able to test is unusually large.

“The environment in which these plants were grown means we can be confident that these rootstocks will enhance tree health and yield in HLB-affected areas,” Seymour said. “Also, because our data set is so large, we’ve got the opportunity to identify plants with levels of tolerance that exceed current commercial varieties.”

In addition to searching for parts of the hearty hybrids’ genomes responsible for their tolerance to HLB, scientists will also be checking for plants that have resistance to other pathogens that are already in California.

Citrus in the state is also threatened by nematodes that chew up roots, preventing plants from taking up nutrients, and by phytophthora, a type of water mold that causes rotting roots.

By searching not only for a solution to the looming threat of HLB but also to problems that have already taken root in California, scientists are hoping to ensure that citrus won’t need to be imported from HLB-free countries and costs stay low for both local growers and consumers.

“This way, we’re making sure the next generation of rootstocks will include the right genes and that we’re being as efficient as possible in our breeding practices,” Seymour said.