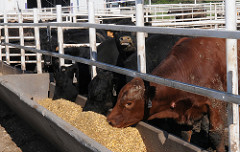 Beef cattle producers could see greater profits in the finishing period with progressive limit feeding, according to research from University of Illinois scientists. (K-State Research and Extension)

URBANA, Ill. — Beef cattle producers could see greater profits in the finishing period with progressive limit feeding, according to research from University of Illinois scientists.

To help keep cattle healthy as they enter a feedlot, producers often feed less, or “limit-feed,” for a short time to allow the animal to adjust to the feedlot diet. The new research looks at the concept of progressively reducing feed intake throughout the diet-transition period, with the goal of maintaining a constant body size.

Feeding previously growing animals this way causes their internal organs to shrink, which reduces their maintenance requirement. This means that they require less feed and cost less. When animals are transitioned back to ad libitum feeding, compensatory growth allows them to grow more on less feed, ultimately saving producers money.

“Producers commonly lower intake when animals come into a feedlot anyway, but no one knew how this should be done to maximize profit. What we’ve done is quantify how much and how long they should limit-feed to maximize their return at slaughter, using real dollars and cents for feed and beef prices,” says study co-author Michael Murphy, an emeritus professor in the Department of Animal Sciences at Illinois.

Murphy and co-author Bruce Hannon, emeritus professor in the Department of Geography and Geographic Information Science at Illinois, applied a custom-built mathematical formula to a real dataset of beef cattle growth in a feedlot. They determined that progressive limit feeding could save enough money that producers could market cattle at a slightly lighter weight but with greater profit.

“When people limit-feed, they often feel they have to keep animals in the feed lot an extra week or two until they get to the size they wanted,” Murphy says. “But that incurs an opportunity cost because they’re not bringing a new group of animals in during that time, and they’re also delaying their income. So, even if they get a slightly lower price for a lighter-weight market animal, they make it up by avoiding that opportunity cost and spending less on feed overall.”

Murphy says the length of time that producers should use progressive limit feeding to maximize profit will depend on the market prices for feedstuffs and carcasses.

“We took five years of market variability to come up with a practical scenario for how profit could be affected. We looked at our results as kind of an upper bound on the profit effect,” he says.

Importantly, the analysis suggests profits and carcass quality reach their peak when limit feeding takes place at the beginning of the finishing period.

Murphy and Hannon’s work indicates progressive limit feeding works in theory. The next step is to show it works in practice. Dan Shike and Josh McCann, both in the Department of Animal Sciences at Illinois, are currently setting up an experiment to do just that.

“Our research suggests it’s worth a try. It should be easy to implement and practical in current feedlot systems. It just takes advantage of the biology in a way that would be most efficient,” Murphy says.

The article, “Progressive limit feeding to maximize profit in the feedlot,” is published in the Journal of Animal Science [DOI: 10.1093/jas/skz027].

For more articles out of Illinois, Illinois.