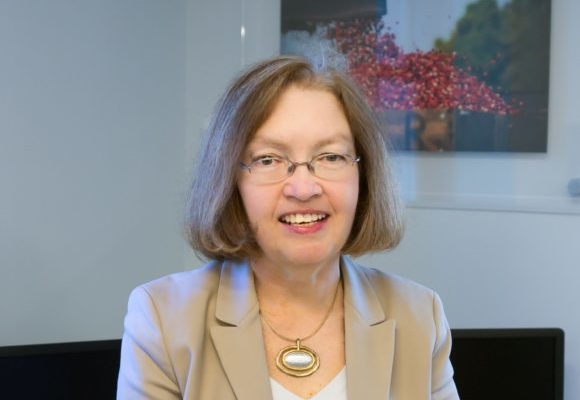 Barbara O’Neill, distinguished professor and extension specialist in the Department of Agriculture, Food and Resource Economics

NEW BRUNSWICK, N.J. — You have probably seen one of those Prudential commercials where a group of adults are told – probably through an oversized graphical game of some sort – that they haven’t been saving enough for retirement. They haven’t even been thinking enough about retirement.

The participants smile sheepishly at the actor who runs the show. But inside they are deeply uncomfortable, knowing that Prudential is right. After the shoot there is a good chance many of them will go back to ignoring this aspect of their lives. After all, sitting down to address it means being reminded that they haven’t done such a great job so far.  Shame, even if it is internal, can be an excellent de-motivator.

DAFRE distinguished professor and extension specialist Barbara O’Neill (‘Barb’ to her colleagues) has spent her entire career at Rutgers studying and solving problems like this one.  We will profile her research in this article for two reasons.  First, Barb’s extension teaching has gotten a lot of press and countless awards over the years; it is time for her research program to take center stage. Second, Barb will soon leave Rutgers after 41 years of service to become a self-employed financial education expert. This is the perfect time to acknowledge her contributions to the world’s stock of behavioral knowledge.

First the theory, then the numbers

Dr. O’Neill’s research is based on a set of theoretical frameworks that were developed by psychologists. They are frequently employed in the public health field, where self-destructive habits are common. So right away, Barb’s framework is more realistic than the typical economist’s assumption that people always behave rationally in pursuit of genuine self-interest. More specifically, the Theory of Planned Behavior considers personal attitudes, social norms, and the perception of lack of control when implementing good intentions. The control factor is critical, for example, in the case of addiction.

The Theory of Planned Behavior has been validated in numerous empirical studies.  It is the scientific foundation of a more action-oriented framework known as the Transtheoretical Model of Change (TTM). TTM argues that people go through several identifiable stages as they push through their innate resistance to change and try to develop better habits.

Over time, TTM has become the science-tested roadmap for clinicians who hope to nudge their clients toward good habits that are sustainable. “Previously,” says O’Neill, “TTM was used primarily with health-related interventions.  I was among the first to use it as a model to study changes in financial behavior.  It was used, for example, in a research study of the impact of the MONEY 2000™ program in the late 1990s.”

O’Neill’s lifetime contribution to the TPB/TTM literature can be illustrated using a single article from the Journal of Financial Planning, called “Propensity to Plan: A Key to Health and Wealth?”.  In a number of ways, including its empirical results, this article solidified the emerging consensus that health and financial behaviors are (1) synergistically related to each other in a way that can spiral an individual’s quality of life upward or downward; and (2) governed by similar psychological mechanisms.

The Financial Planning article found that an overall “propensity to plan” was associated with beneficial behaviors on both health and financial dimensions.  A more interesting finding was that the behavior scores were higher, the more frequently the planning activities were performed. One implication of this second finding is subtle. If you engage in a financial planning activity weekly, it will be far less daunting than if you do it annually (the millions of Americans who collect all their financial records only at tax time would surely agree). Therefore, this 2016 study corroborates an important clinical recommendation that TTM had already recognized. That recommendation is captured in the title of Dr. O’Neill’s award winning workbook, Small Steps to Health and Wealth.

An obvious economic critique with a not-so-obvious answer

As trained econometricians, some of Barb’s colleagues might scoff: “Aha! The study shows association, not causation. The planners in the sample probably have innate characteristics that predispose them to good behavior across the board.  They are just ‘boy scouts’ so to speak.  Where is the evidence that this empirical relationship is causal, or that it can be used to effect change?”

“Glad you asked,” responds O’Neill.  As a skilled TTM practitioner, Barb has conducted hundreds of face-to-face and online workshops designed to create new habits that persist over time.  It is important to note that the people who choose to enroll in these workshops are also the product of selection bias, but in the opposite direction from the boy scouts who did well in the Financial Planning article. They are more likely to be bad financial planners than good ones (although admittedly, they are willing to take that first step).

Program evaluations show that behaviors and outcomes can be improved for this non-planning group — at least once you get them in the door.  As O’Neill reports: “The MONEY 2000™ program that I led in the late 1990s resulted in $7 million of documented savings and debt reduction by New Jersey residents and $20 million nationwide.” Interestingly, when asked what are the three most important research questions answered by her research, Barb listed a wholly non-theoretical question at number 1: “How did a Rutgers Cooperative Extension personal finance program make a difference in people’s lives?”

Take that, Mr. Econometrician. Even without a control sample, it seems highly likely that the observed turnaround in the MONEY 2000 population is causally-related to the TTM intervention, because we would expect this group to procrastinate on financial planning in the absence of a skillful nudge and a good toolkit.  O’Neill has compiled evidence of a causal relationship between research-based interventions and improved financial outcomes, based on hundreds of seminar participants monitored and tracked in real time.

As one of the nations’ most widely-published personal finance experts, Barb keeps track of current developments, like Obamacare, and she is always ready with a thoughtful educational response. A new challenge for advisors and policy makers, she says, is the “growing extent of income volatility and financial fragility in the U.S.”  This new lack of resilience is a product of reduced employer-provided benefits, the growing gig economy, rising levels of student loan and credit card debt, and some risky behaviors that governments almost seem to be encouraging, like expanded online gambling and sports betting opportunities.

Interesting stuff, but we are now over the word limit for DAFRE Dispatch.  Feel free to continue a conversation on these issues with Dr. O’Neill on Social Media: she is a seasoned Twitter and Facebook user.

We are unapologetic about taking a deep dive in this article into Dr. O’Neill’s academic research. It is a fitting tribute to a highly-respected DAFRE colleague who carries the Distinguished Professor title.

Lanternflies spreading, but not on Christmas trees

A delicious ornamental for your garden
May 3, 2021