Home / DelMarVa / Product helps break down crop residue
A new user experience is coming! We'll be asking you to login to your Morning Ag Clips account March 1st to access these new features.
We can't wait to share them with you! Read more here. 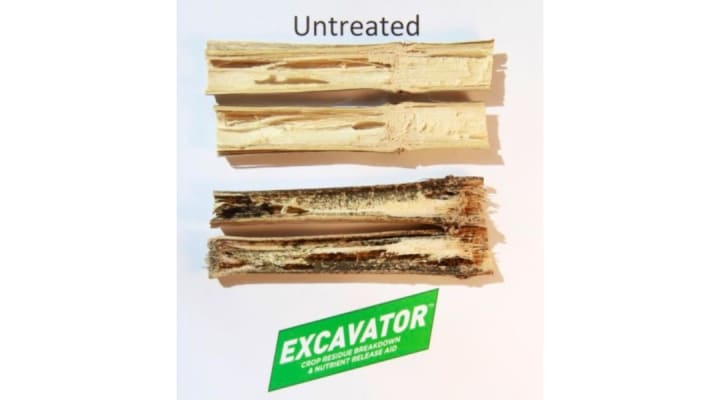 “EXCAVATOR springs from our effort to test, refine and make available new biologicals at a price point that can improve every farmer’s ROI (return on investment),” says Mitch Eviston, founder and CEO of Meristem. “Our alliance with Larry Fiene and Planet Earth Agronomy is already paying out with more ways to serve farmers and break down barriers to in-field application of this beneficial technology.”

EXCAVATOR is geared to solving consequences of better genetics, faster planters, and higher yields. Since 1991, average corn yields in America have increased from 108.6 bushel per acre (BPA) in 1991 to 172 BPA in 2020 according to USDA. To grow and fill out heavier ears, corn stalks got stronger. To gain yield, plant populations went up, creating more residue. Meanwhile, planter speeds have doubled in recent years and 10-mph is now common. All these issues converge into a big challenge for high-yield growers: How do I get the crop in the ground quickly, while avoiding skips and gaining the consistent stand crucial to high yields?1

“Our planting system is designed to get the crop planted inside of six days,” says Indiana grower Craig Armstrong. “Anything that helps us move faster and still get even germination is probably worth it.” He plans on using more EXCAVATOR this year after seeing good early results in his test plots.

“The big issue with crop residue is that the planter will come through and the coulter will be unable to cut the trash,” explains Fiene, field agronomist and founder/CEO of Planet Earth Agronomy. “Instead, it will bend into the soil. As a result, some seeds will get pinned in folded trash and they won’t germinate, or worse, they will germinate late and end up being weeds.”

Fiene says the blend of six proprietary microbes in EXCAVATOR™ stimulate and fortify biological activity that will also release field-available nutrients from crop residue faster. Initial data indicates increases of up to 30-40 lbs N, 5-10 lbs P and 35-40 lb K in the crop following EXCAVATOR™ application. On average, Fiene says he’s seeing a yield advantage of 7.5 bushel per acre in his research with EXCAVATOR on corn. “And I would attribute that to the more uniform germination, consistent stand and improved nutrient availability.”

“The color difference was just amazing,” says David Olson, a farmer from Stoughton, Wisc., who is using EXCAVATOR. “Untreated fields are just so golden compared with ones where the EXCAVATOR is working. You can tell the bugs are breaking that residue down.”

A conservation-tiller, Olson says he can easily tell the difference as he plants. “If you have the EXCAVATOR, it just makes the planter work better,” he says. “So consistent. So smooth. And the nitrogen won’t get so tied up in the residue either.”

About Meristem Crop Performance Group, LLC
Meristem Crop Performance Group, LLC (www.MeristemAg.com) is one of the fastest-growing direct-to-farm crop input companies in America. Meristem sources, formulates and delivers high-quality crop inputs to farmers at the least cost possible, at savings up to 30 percent. By helping farmers and local independent agribusinesses make the most of their infrastructure and intellectual property investments, the company improves productivity and removes waste in the established distribution channel. Meristem is led by a world-class team of ag professionals passionate about creating the most efficient channel to move innovative practices and novel technologies to market for the benefit of the American Farmer. For more information visit www.MeristemAg.com.

U of I Agronomy Day happens all summer