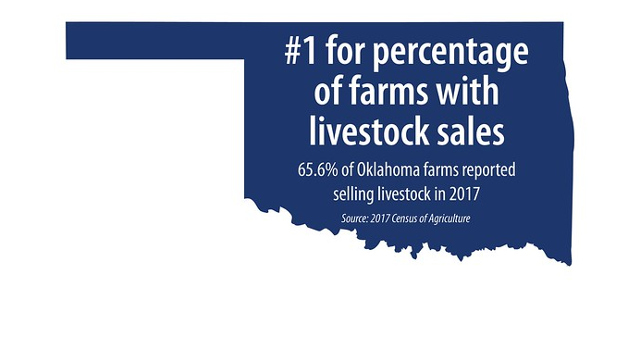 Want to know more about agriculture in the Sooner State? Don’t miss the new State and County Profiles. (USDA)

OKLAHOMA CITY — With the recent release of the 2017 Census of Agriculture, the agricultural industry has a chance to remind consumers about the importance of agriculture, and in Oklahoma that is no exception. With $7.5 billion of agriculture products sold in 2017, Oklahoma Agriculture continues to show its importance. Oklahoma’s animal industry showed the largest increase in sales between 2017 and 2012 with a 13 percent increase. This increase helped Oklahoma obtain the number one spot in the nation for the percentage of farms having livestock sales in 2017, with 65.6 percent of farms reporting the sale of livestock.

These, among many more agricultural facts about Oklahoma, can be found in the 2017 Census of Agriculture report.

A big ‘Thank You’ to all the Oklahoma producers for your response and for showing how important agriculture is to Oklahoma!